Start a Wiki
This item is free to use.

A P-Floatie is a pooltoy recreation of the P-Balloon and, therefore, can't be used by Mario to turn into Balloon Mario. However, they have other uses like using them as waterbikes (Thanks to the self propelling system which activates when it's on the water and the handle bars) for racing or just to lay on it and relax.

The P-Floaties made their first canon appearence in P-Floatie Racers, a Mario Kart-type fan game. In this game, the P-Floaties replaced karts so all the tracks took place in beaches, rivers or pools. The P-Floaties were recolored depending on the character who drove it (They also had character decals on the sides). This game showed that they were puncture-proof because they could take a lot of hits from different items and still be able to race with.

There's an unlockable golden version of the P-Floatie in this game. To unlock it, the player must beat all cups in Mirror Mode. It seems to have the best acceleration and top speed in the game but is very heavy.

The default P-Floatie appeared as Rosalina's Blue Shell form. When she had built up enough speed, she would take it out and ride it. It would cause slight Ground Pounds when landing if it fell from a great distance. 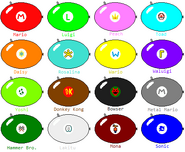 P-Floaties for the Mii in P-Floatie Racers
Add a photo to this gallery
Retrieved from "https://fantendo.fandom.com/wiki/P-Floatie?oldid=1960866"
Community content is available under CC-BY-SA unless otherwise noted.