The P-Balloon (also known as the Power Balloon) is one of Mario's Power-Ups that turns Mario into Balloon Mario. It first made it's appearance in Super Mario World and reappears in the game New Super Mario Bros. Omega. It reappears in a reworked form in Super Mario Maker 2 in the game's final update. This version of the P-Balloon allows the player to be fully in control of which angle and direction they are floating towards, as opposed to the original game's simple vertical and horizontal mobility.

The P-Balloon is a yellow balloon with a white P on it. It floats in the air and doesn't descend down, up, or move when spawned.

The P-Balloon inflates Mario or anyone else using the power-up, causing them to swell up massively in the stomach area. In Super Mario Maker 2, the user gains yellow pants with the letter P on it if they happen to be in overalls. When using it, the player can release air out to go either horizontally up in Super Mario World or tilt themselves in any direction to propel in that direction in Super Mario Maker 2.

The P-Balloon returns in New Super Mario Bros. Omega to turn Mario into Balloon Mario. This game is mostly notable for it's artwork which would be used as the "3D" art for this item.

The P-Balloon appears in Super Mario Galaxy: The Ultimate Adventure as a listed power-up for Mario.

The P-Balloon appears as Mario's special power-up exclusive to him in Super Mario 65. 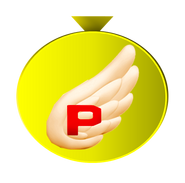 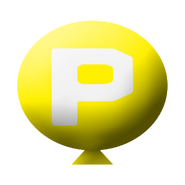 There is a pooltoy recreation of this item called P-Floatie. They don't have the same effect as the real P-Balloon but they have a self-propelling system and handle bars that allow themselves to be used as waterbikes. Although it can also be used for relaxation.

Retrieved from "https://fantendo.fandom.com/wiki/P-Balloon?oldid=3189020"
Community content is available under CC-BY-SA unless otherwise noted.