Fantendo - Game Ideas & More
Register
Don't have an account?
Sign In
Advertisement
in: Free to use Characters, What is the New Fantendoverse?, Original Characters,
and 10 more

Ovex is an Abyss Walker from the planet Xicicle. They guarded the Dark Galvan Artifact known as the Zasia Chestplate, which was taken by Netnu shortly before the events of Days of Victory. Since then, they have attempted to track down Netnu to take back the Zasia Chestplate. Ovex is able to utilize Eldritch Energy, which also goes by the name of Abyssal. Ovex was created by Exotoro (t∣b∣c) as a character to explain where the chestplate that Netnu wears comes from as well as expanding certain tidbits of cosmic Fantendoverse lore.

Ovex is a creature that lives on the planet Xicicle and is the collector of rare dark artifacts. Ovex lives in seclusion due to their treasures, which they try to keep protected to themselves. Only one person has eluded Ovex, being the Beorn Netnu who sought out a artifact that would allow them to perform Tarot Magic. Ovex is not exactly the most friendly person, but they are willing to working with anyone that can stop Netnu. They are seen as the dark version of Denos and Logi.

Ovex is a tall creature with a long curved headpiece that takes on a red color. It has cracks from their battle with Netnu, although stays mostly intact. It is wrapped in a blue ribbon cloth that goes behind them, which appears to be ceremonial in purpose. Underneath their headpiece is a alien head where only the mouth has been seen, which has red bleeding teeth. The head is connected to the body through thick veins and their body consists of red, tightly packed muscle that is protected by white armor. The armor takes on bone-like qualities.

Ovex is a fairly collected creature, who hangs out in their cave filled with various dark trinkets or other things they find interesting in a sort of hoard that they keep to themselves. They are somewhat of a loner and acts hostile to those it thinks are trying to invade or steal from them. They have fairly animalistic traits on the surface, but can be quite intellectual on other occasions.

Ovex is seen as the dark version of Denos and Logi, although this does not mean they are evil. Rather, instead they simply look out just for themselves while appearing to care about others, where as Denos and Logi can sometimes come off as self-serving but do genuinely care about their friends. Ovex is willing to work with people to destroy Netnu, but ultimately they does not care about the wellbeing about anyone but themselves.

While Ovex is asexual, they are not aromantic. They have been able to develop feelings for anyone that's willing to actually care about them and they become the exception to Ovex's self-serving nature. Ovex becomes clingy and possessive of them, just like their dark artifact collection. These are traits that can be bent over time- Ovex does not mean to hurt those they love.

Ovex possesses the ability to channel Abyssal, the antithesis to Aura. The Abyss that Ovex possesses pulls from their pain, of which Abyss Walkers can wallow through due to their exposed muscle. Ovex can use their Abyss to inflict powerful pain onto their foes, making them undergo the sensation of their skull caving in or them losing their limbs while keeping their body totally intact. 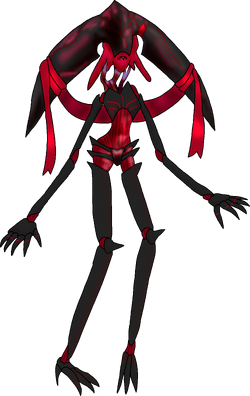 Dark Abyss Ovex is the name of a Abyssal transformation that Ovex can take on while on their home planet Xicicle, which is between what is known as the Spirit Universe and the Wasteland. Xicicle is a powerful Abyssal conduit for Ovex as it exists between the space of dead and forgotten, two places where Abyssal can be pulled from the easiest. While in this form, Ovex becomes inundated with non-stop sharp pain sensations but can pull from Abyss as long as they can stand it.

Dark Abyssal Ovex has very limited use but can be very powerful with a plan in mind. Due to Ovex mostly living on the place where it would be the most effective to take, they can typically draw this out to kill intruders in haste.

Ovex dislikes Netnu intensely and people who also hate Netnu perks their interest. The easiest way to get Ovex on board with you is to align against Netnu, as Ovex has been waiting a long time to get their Zasia Chestplate from Netnu and was told by The Oracle (the dark version of The Seer) that Netnu will go down a dark path that could threaten the existence of the multiverse by cojoining two universes. Ovex has been defeated by Netnu once when they attempted to stop them from leaving Xicicle with the Zasia Chestplate.