Overhere is a character developed by Pyro Enterprises. He acts as a minion of Inversim and is the villain's primary reconnaissance and sabotage officer.

As far as personality goes, Overhere is an open book with many interpretations. He is only able to communicate by replicating words that he had heard others say and splicing them into patterns, so his true emotions are difficult to gauge. However, it is known that he is extremely loyal to Inversim.

Overhere's past is largely unknown, but it is known that he has spent excessive amounts of time residing in prisons across the Pyroverse, most notably Gaol Stronghold. His criminal track record is varied- he has been incarcerated for fraud, violence, psychological torment, and jaywalking.

His reasons for working alongside Inversim are unknown at the current time.

Overhere possesses basic audiokinesis as his primary offensive ability, being able to create piercing screams or render an opponent deaf or silenced. His greatest ability, however, is his ability to automatically record all sound around him in a 12-foot radius. He can then play back his store of recorded sound at will, and must utilize this recorded speech to speak. His storage is memory-dependant, but he has an extremely large memory for a Sonorodium. 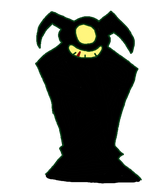 Retrieved from "https://fantendo.fandom.com/wiki/Overhere?oldid=2491624"
Community content is available under CC-BY-SA unless otherwise noted.