Osiris is a planet which resembles Earth in many ways, such as in its culture, its geography, and its history. It has various countries that are plotted around its surface, which is composed mainly of saltwater. Osiris' population is comprised mostly of the homo sapien species. The planet is split up into five different continents which contain (currently) forty-five countries in total.

Most countries on Osiris use their own forms of currency, and must be converted before trading. Some countries, however, share the Page as their monetary object. As such, countries using the Page often trade more often than one who don't use it. There are some exceptions, however.

Osiris has been known to be quite mysterious in comparison to Earth. Some of its countries have been known to exhibit strange events. Soupistan, for example, is well known for its zombie attacks, and, as such, the population is trained for what to do in outbreaks. 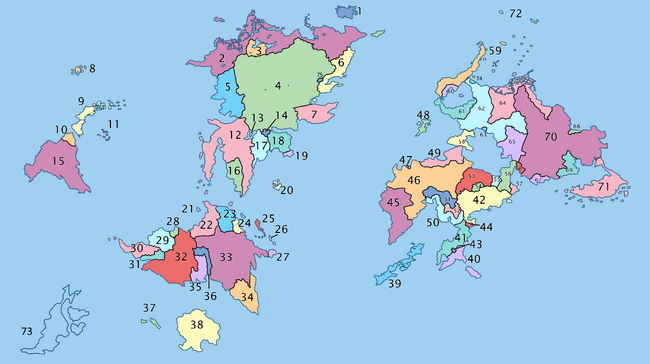 There are five continents on Osiris, along with a North and South Pole. These five continents are known as Lumilia, Vesinia, Azunia, Sytiria, and Dolenia. Each continent averages to having sixteen total of countries, though some may have more or less. To see the location of each continent, see one of the maps below.

Lumilia is the largest continent on the globe, being located at the north and center of the planet. Due to its great size, it varies greatly in its climate and environment. Almost half of the entire continent is taken up by the large and powerful nation of Lumoshiland. Northern Lumilia has a large tundra, along with a vast region of taigas. There is a long mountain range creating most of the border between Dongolia and Lumoshiland, and a small desert within Uliessa. Majority of the continent, otherwise, is plains.

Vesinia is the smallest continent on the globe, consisting of five island nations just to the west of Lumilia. The northernmost country of the continent, being Supaku, consists completely of forests. Otherwise, the island countries are almost completely tropical. The largest island of the continent is the territory of Illusia, which also has a large rain forest system at the equator.

Sytiria is a continent on Osiris located just to the south of Azunia. The largest country on this continent is Pabels. The equator passes straight through the center of the continent, making a great set of rain forests. Majority of the continent has tropical climate, though there are some mountain ranges and even a taiga at a high altitude in Soupistan. The highest set of mountain ranges on the entire planet cover the entire country of Griftopia, making it the coldest country on the planet.

Dolenia is the final continent on Osiris, which is the only continent that does not touch the equator. The northern part of the continent gets little rain, causing the existence of a desert and a set of savannas across ? and Illusia. South of the mountain range forming the borders of ?, Illusia, and Sketchiria, there is a large rainforest. The rest of the continent mostly has tropical climate. There are six major islands which are part of the continent to the south, making up three territories. These countries have tundras within them.

The planet, Osiris consists of 6 Oceans, each forming part of the landscape and seperating the continents from each other. The Six Oceans are formatted similar to Earth's own Oceans with four central oceans akin to the Pacific, Indian and Atlantic Oceans and 2 Polar Oceans akin to the Northern and Southern Seas. 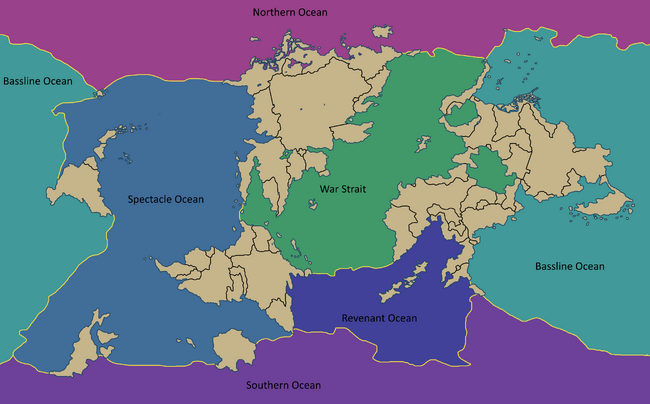 Named due to the common conflicts between the Ancient Lumoshiland Nation and the Modern Neo Darkloria Nation, the War Strait is the second smallest although most important of the Oceans as it is both a hub for trade between 4 of the continents as well as for war. It is the only Ocean not actually called an Ocean in its title for unknown reasons. Over time the War Strait has increased in size as the continents of Lumilia, Azunia, Dolenia & Sytiria gradually drift away from each other. A few years ago it was proposed to combine the War Strait and Revenant Ocean as one due to their close proximity and there being no significant ocean current difference between the two. This resulted in a minor war between countries in Dolenia and Sytiria wanting to keep the Revenant ocean while countries in Lumilia and Azunia wanted to combine the two oceans. Ultimately it was decided to keep the two seperate as an added factor to the oceans was the culture of the continets surrounding each ocean.

The largest of the Oceans, the Bassline Ocean is commonly used as the divider of maps as there is a large gap of Ocean towards the East half of it. The Bassline Ocean is known to house at least 60% of all known Marine Life in Osiris and is constantly under watch from more environmental countries due to the impacts that can effect this Ocean. The Bassline Ocean also has the deepest point in Osiris, the Artony Trench, a trench ~20,000km Deep that spans along the south section of the Ocean usually crossing most maps. The Trench has yet to be fully explored yet as the high volcanic activity of the region makes it dangerous to do so.

Also known as the "Golden Ocean" it has become a large tourist destination for many as several rare species including 80% of all Marine Mammals exist exclusively in the Spectacle Ocean. It's two names are derived from ancient Lumilian and ancient Vesinian texts that had described the beauty of the Ocean at sunset.

These two Oceans are recognized due to the intense cold of them as well as their extremely fast currents, it is not advised to have any ship move through the far ends of these two oceans as the oceans become choppy and often have large Icebergs blocking movement. An effort was made a few decades ago to destroy as much of the ice as possible with Driller Boats however attempts had proven far less effective than anticipated as the cold becomes so strong towards the Far North and Far South that oil immediately freezes leaving several Driller Boats stuck in Ice.

The beginning times of Osiris is still greatly disputed, though all recorded history on the planet has begun in the year "0", likely made to be close to that of the planet of Earth. Each individual country has its own unique history, so you may go to the articles linked above to read more about the individual histories of countries. This section is only to describe the history that affected the planet in total.

Three countries, historically, were great empires on the planet of Osiris. These countries were Arcadia, Lumoshiland, and Jakeistan, who battled for absolute control over the planet. Lumoshiland had histories with roots back to very early times on the planet, though Jakeistan had only risen as a power after rebelling against the Patriarch Republic of Northern Arendonia. Arcadia formed from a nation formerly existing in its spot, known as Termania, which was very powerful.

Lumoshiland had control over the majority of the Lumilian continent, though the mainland of Jakeistan still existed to the north of Lumoshiland. Jakeistan conquered the Vesinian isles, along with parts of southeastern Azunia (such as Hammich and country no. 69) and Sytiria. Arcadia gained control over much of the Azunian continent that was not taken by Jakeistan, except for one country named Sevennes (later named Luken), a rebellion from Jakeistan that Arcadia still heavily disagreed on, until Luken came to an agreement to help Arcadia.

Revolutions against these powerful countries began as early as the year 1200. Countries such as Marinia and Hammich rebelled against the empires controlling them and created their own countries, and many followed. The three powerful nations, though smaller than they were, are still large nations on the globe-- particularly Lumoshiland and Arcadia.

The War of Osiris is a war that started in the year 2015, mainly between Arcadia and Lumoshiland (the two largest countries on the globe, also which had grown to be the most powerful). Many countries were dragged into the war, whether they border either of the two countries or not. Most countries sided with either Lumoshiland or Arcadia, though some fought independently.

In late 2014, Arcadia was growing more and more quickly in status of its great global power. They felt that, in order to reach their full potential, they would need to have power outside of the globe. They decided that they would claim political control over the moon, and initially had no dispute over it. However, in early 2015, Lumoshiland had a similar idea to that of Arcadia, and said that they also wanted control over the moon.

The war ended with Lumoshiland at an advantage, with an allyship from many formerly neutral countries such as Illusia. However, Arcadians fought their hardest and managed to drive away enemy forces from their country, and gained control over Jakeistan and Clausopolis, which bordered Lumoshiland. The two countries decided to sign a peace treaty after a lengthy stalemate and neither country had official control over the moon. Political boundaries returned to as normal before the war began.

The culture of Osiris, like Earth, is very varied based on which country you are speaking of. The section below only lists a summary of the general culture of the planet in total, though to read more about the specific cultures of each country you can go to a country's article.

Though many languages in Osiris were taken over from the cultures of Earth directly, majority of the countries have formed their own languages-- usually using the Latin alphabet and having evolved from modern languages of the planet Earth. However, there are more specific branches of languages as formed from each continent and their interactions with other cultures. Below is the list of languages spoken on Osiris and their branch.

Osirisvision is a monthly song contest which takes place in Osiris, in reference to the real life Eurovision. Leaders of each country select a song which they admire greatly, and they enter it into the contest. Each competing country will vote on other songs to give them points, and the song with the most points in the end wins. The very first contest in May 2015 took place in Marinia. After the first contest, the next contest is hosted at the country of the winner of the previous one.

The Osirislympics are a monthly event across Osiris which centers around athletics. The Osirislympics are made to mirror the real life Olympic Games on Earth. Basically, each country taking place has to compete in certain athletic categories and attempt to achieve a gold, silver, or bronze medal as a reward for their entire country.

Retrieved from "https://fantendo.fandom.com/wiki/Osiris?oldid=2258024"
Community content is available under CC-BY-SA unless otherwise noted.