Oshawott is a bipedal sea otter-like Pokémon. It has a spherical white head with small, triangular dark-blue ears on the sides. Oshawott's eyes are dark and its dark orange nose is shaped like a horizontal oval. Several freckles cover its cheeks which may be premature whiskers, and two pointed teeth can be seen when it opens its mouth. The light blue fur on its body forms bubble shapes around its neck. Its arms are white and rounded, while its feet are dark blue with three toes each. It also possesses a rudder-like dark blue tail. It carries a pale yellow seashell called a "scalchop" on its belly. This shell is made of the same material as its claws, and is used for both battle and cracking hard berries. 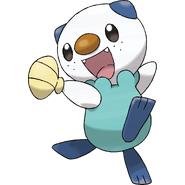 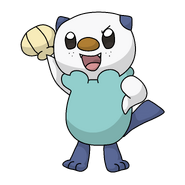 Oshawott in pokemon X and Y
Community content is available under CC-BY-SA unless otherwise noted.
Advertisement