Origin is a deity-like Beorn of the species created by an unknown party. He is one of the few Beorns to survive the destruction of Zeon, however he left long before the Doomuli showed up. He is Destiny's closest friend, and acts as his rival and equal in many ways.

When the New Fantendoverse was created, The Fan and The Enemy found themselves unable to replicate the Beorns in the new universe, as there were so few of them. As Beorns were the only species that could judge ascended beings in the past universe, The Fan and The Enemy instead began work on a new judge species. As luck would have it though, two Beorn gods (known as Judges) and a replicated Zeon mysteriously appeared in the newly constructed Fantendoverse. Although they claimed to be from the old Fantendoverse, the Fan and The Enemy found that their memories were completely suspect at best. Despite this, they never told the two their suspicions and let them carry on as usual.

When Beorns achieved the ability to Judge those who could and could not ascend, Origin became known by the alias, The White Judge, referring to Origin's unwillingness to condemn to destruction and would instead limit the power of an ascended creature at best. Origin was therefore often paired with another Beorn who went by the alias of "The Black Judge", who was another Beorn who would harshly condemn those who were not worthy to the point of ruthlessness. The two would often work together to judge the most powerful beings and soon become close friends. Origin never learnt the name of the Black Judge originally. Over time, Origin and The Black Judge gained admiration for each other as Origin saw courage in The Black Judge while The Black Judge saw control in Origin.

He was soon contacted by The Gypsy, explaining to him that there was an impending doom soon approaching Zeon of unknown origin and that Origin must survive the disaster. He was told the other Beorns would not survive.

Trying to prevent the disaster, Origin created a machine called the Ark Reverent with The Black Judge. The Ark Reverent that was intended to protect Zeon from any natural or extra-terrestrial disasters. A fatal accident occurred when Origin attempted to upgrade the machine to prevent man-made disasters it overloaded and The Black Judge quickly died from cell degeneration from the resulting explosion.

Origin eventually left behind Zeon due to the Doomuli (which was the impending doom the Gypsy spoke of), which were capable of taking him on without being ascended beings. He was aware of Zeon's destruction at the hands of Doomulus Grime, but ultimately decided that moving on was the best decision. When the universe began again, he witnessed the same turn of events and accepted them this time, saving Destiny (The Black Judge's true name) by never creating the Art Reverent. They now scout for Beorns that survived the devastation of Zeon.

Often described as being "Neutral Good", Origin acts someone who knows everything yet acts like he knows nothing (possibly due to his false memories about the universe past). He appears naive and calm most of the time, however, is truly incredibly intelligent and cunning capable of seemingly completely understanding someone based on a single action they make. While some say this is just him being judgemental, in reality he believes he has witnessed so many variations of that person that there is nothing that would normally surprise him.

That being said, the complete unpredictability of the Hyper Orbs had brought life and emotions back into Origin making him the first to access Hyper Mode. It is not defined as to which emotion he used to unlock Hyper Mode however it was likely loss. After this event he once again shows his understanding towards all yet is compassionate and knows when to stop.

None available at the moment.

Destiny regards Origin as her closest friend, greatest ally, opposite and potential love interest. Origin and Destiny in "original universe" were very much opposites as both were regarded as opposite extremes of judges. In the New Fantendoverse however, the two are close friends and always allies ensuring stability in the universe. Destiny is secretly attracted to Origin which is often something other Beorns in the past were quick to ask Destiny about, however she would often deny the claims stating that they are "just friends".

Origin posesses a number of abilities that help protect him in various situations. His most identifiable ability are the Worms, a set of eleven Cosmic Worms that allow Origin to see the universe from multiple locations as well as when combined with him access his most powerful forms of his abilities. 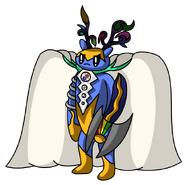 The Yellow Worm (Lightning Summon)
Add a photo to this gallery
Retrieved from "https://fantendo.fandom.com/wiki/Origin?oldid=3210854"
Community content is available under CC-BY-SA unless otherwise noted.