Omochao  is a robotic ciao from the Sonic the Hedgehog video game universe. It is used as a help function during the game. Omochao appeared in game levels: Sonic Adventure 2 for Sega Dreamcast, Sonic Adventure 2: Battle for Nintendo GameCube and Sonic Advance 3 for Game Boy Advance. To activate it, just touch it. He also appeared on the Sonic Heroes menu and is a Sea Gate level navigator. In Sonic Riders, Omochao plays the role of a commentator.

The origin of the robot in the plot is unknown; Omochao just “appears” in Sonic Adventure 2 without any explanation.

Many people do not find his "help" useful and he often annoys them. This little robot can be taken and thrown at the enemy in order to destroy it. He, of course, begins to curse "I'm not a weapon to throw at enemies, you know!". Having recovered from throwing, Omochao speaks a number of phrases, expressing his dissatisfaction with being a weapon. It’s funny. Sometimes he says that he cannot remember where he is and who he is. In addition, you can take it and shake it up and down, from which he will again begin to swear. If you play Eggman or Tails, you can shoot him so that he finally lags behind.

In Sonic Riders, Omochao is too critical a commentator to announce even the smallest mistakes. Even because of landing on the B-rank, he manages to say something extremely critical. Many annoying. He also appeared in one of the cutscenes. He did not return in the second part of the race - Sonic Riders: Zero Gravity. In Sonic and the Secret Rings, Omochao appeared in multiplayer to help players in mini-games

Omochao appeared in the Mario and Sonic at the Olympic Winter Games on the Nintendo DS to "help" the players.

He was also a commentator in Sonic Free Riders, but in cutscenes he appeared more often than other characters and, unlike Sonic Riders, he does not comment on anyone during the race.

In Sonic Generations, Omochao not only helped at the levels, but also sold new abilities, as in Sonic Riders. 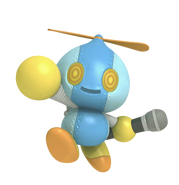