Olimar is a playable character in Super Smash Bros. Calamity. Olimar is a spaceman hailing from the planet Hocotate, crash landing to a planet filled with Pikmin, referred to PNF-404, and teams up with them to repair his spaceship, the S.S. Dolphin.

Olimar now has Winged Pikmin carrying him onto the battlefield after being K.Oed and revived.

Pikmin health has been tripled, increasing their vitality.

Olimar can now pluck out Rock Pikmin, which deal more knockback and damage, and have higher durability than the other Pikmin.

New up tilt, a jumping headbutt, which can combo into itself, although it deals less damage.

Olimar now does his own smash attacks when he does not have any Pikmin with him.

Olimar's side smash involves him doing a drop kick forward, which deals even less knockback and damage.

Olimar's up smash involves him flipping his antennae above him. It has slightly more knockback.

Olimar's down smash involves him doing a spinning punch attack with the Rocket Fist.

Olimar uses Pikmin in his smash attacks, back aerial, up aerial, down aerial, pummel, throws, and side special, and can pluck up to three Pikmin using his neutral special, and the next Pikmin in line will be used in said attacks before going to the back of the line. Using the down special will cause all Pikmin not near Olimar to cease any action they are doing and return to Olimar. Attacking Pikmin will cause them to take damage, and even die when they take enough damage.

Red Pikmin have 27 health and deal strong flame damage in their attacks (1.2× (attacks)/0.8× (throws)). They are immune to flame attacks, and do not die when touching lava, but take double damage from water attacks.

Yellow Pikmin have 27 health and deal electrical damage in their attacks (1× (attacks and throws)). They are immune to electrical attacks, but take double damage from water attacks.

Blue Pikmin have 42 health, the third most out of all Pikmin, and have great grab range and their throws deal higher knockback than any other Pikmin (1× (attacks)/1.6× (throws)). They are immune to water attacks, and can swim in water before drowning.

White Pikmin have 12 health, the least out of all Pikmin, and deal strong poison damage in their attacks (0.8× (attacks)/1× (throws)). They are immune to poison attacks.

Purple Pikmin have 45 health, the second most out of all Pikmin, and deal great knockback in their attacks (1.4× (attacks)/1× (throws)). They have less range than any other Pikmin stated above, and are slower than other Pikmin.

Rock Pikmin have 60 health, surpassing the Purple and White Pikmin in health and their attacks, while having even less range than the Purple Pikmin, deal great knockback and can kill surprisingly early. They have higher defense as well, tanking in less damage than other Pikmin, making them hard to kill. They are rare to pluck out, are very slow, and only two can appear each match. 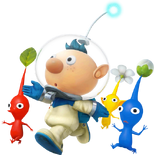 Add a photo to this gallery
Credit goes to Mirai Moon (t∣b∣c) for the alternates. Olimar has three new alternates than turn him into Louie, Olimar's partner from Pikmin 2, Brittany, and Captain Charlie from Pikmin 3.

Retrieved from "https://fantendo.fandom.com/wiki/Olimar_(Calamity)?oldid=3206469"
Community content is available under CC-BY-SA unless otherwise noted.