Oiram is usually depicted as a dark clone of Mario created by Bowser or another villain. His personality, goals, etc. vary throughout his appearances, but usually his primary mission is to eliminate Mario.

He serves as the final boss of New Super Mario Bros. All-Star Adventure. First, he battles Mario by himself. After his first phase is beaten, Bowser arrives and helps him with the second phase. Once the second phase is complete, Bowser becomes Dry Bowser(the way he does in Super Mario 3D Land), and the final phase. Once Oiram and Bowser have been fully defeated, the Mushroom World is saved, and time is restored to its normal state.

Before the final showdown begins, Oiram reveals that he had been helping Bowser with his plan, but made a mistake during his assistance. The Koopa King had meant to simply send Mario back into 1981, but something had wrong; Mario was instead transported to the events of Donkey Kong. This was because Oiram had accidentally bumped into Shadow Mario, which made a collision of history and caused Bowser's doomsday device to confuse the Mushroom Kingdom of 1981 for Brooklyn, New York, where Donkey Kong apparently took place. Then the path of history in the entire meta-universe started to collapse in on itself; timelines were either mixed together or torn apart. Oiram also reveals that he is the key to Bowser's long-hoped-for timeline: the timeline in which Bowser had controlled Mushroom World for over 25 years. Then he says, "Now that the multiverse's history has been scrambled, I might as well destroy you so I can give Lord Bowser the timeline he always wanted."

Oiram returns in Silver Spurs Omicron: Echoes of Disaster as one of the main antagonists. After finding out that the old Spursverse timeline has been fused with the new one, he decides to wipe out half of the dimensional cluster's population so he can "cleanse" reality.

Oiram appears slightly different in the Lapisverse, his first appearance being in Fighters of Lapis 4/వరల్డ్స్ కలయిక. After Mario and the others broke the copies of the Mirror of Truth, he appeared on the other side of Mario's mirror. Unlike the rest of the dark clones, he seems to understand he is a clone but still wants to take the original's place.

Oiram also has a red cap, as opposed to his normal blue cap in the rest of his appearances. He also has a shadow-being following him, along with shadowy arms. The shadow seems to morph in shape and the arms being the only physical part of the shadow being.

He is also second in command of the Fusionist's forces. 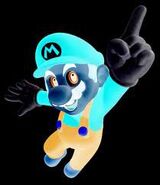 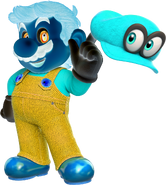 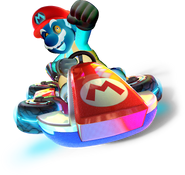 Retrieved from "https://fantendo.fandom.com/wiki/Oiram?oldid=3081709"
Community content is available under CC-BY-SA unless otherwise noted.