Octotroopers are the main soldiers in the Octarian army from Octo Valley, of Splatoon. Octotroopers usually patrol the area on a distinctive machine, that can shoot bullets of ink when they need to. Being the most common enemy Agent 3 will encounter, Octotroopers are very easy to defeat, and not much of a threat by themselves.

They have a subspecies called Twintacle Octotroopers, which have two tentacles. There also appear to be two variations of both species: Shielded Octotrooper and Octodiver.

Octotroopers appear to be large octopus tentacles with legs. Their back side and hairstyle-shaped tip are colored red covered in white suction cups, while the face and belly side are white. Like most Octarians, their face consists of large, green eyeballs rimmed with purple eyelids, and they have thick, dark purple lips. Their legs are small and thin and they wear black boots.

Their tentacle's tip also doubles as a hand, which they use to control the device they usually ride.

The vehicle they stand on appears to be a cylindrical metal object with a metal hose and nozzle to shoot ink. There appear to be two variations: a stationary one with a three-legged stand and a mobile one with a tire-like hovercraft bumper. The device itself is completely hollow, and it remains a mystery how it can operate. 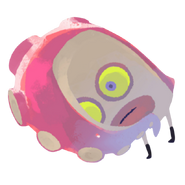 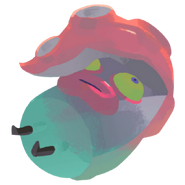 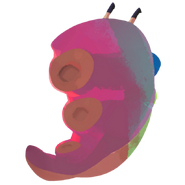