Octoombas (also referred to as Electrogoombas and Octogoombas) are common enemies in Super Mario Galaxy and its sequel. They are said to be a cross between Goombas and Octopuses, and resemble a cross between the former and Octoroks from the Zelda series. They act differently depending on the game they are in; in some games they act similarly to Goombas and aim to headbutt Mario, while in others they instead fire stones at the plumber from either a moving or stationary position.

Octoombas are planned to be playable in the new Koopa Kart game, Koopa Kart Galaxy, for they are featured in the latest updated artwork, along with Koopa Troopa. 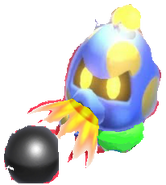 A cannonball-shooting octoomba by Up Up the Cat (t∣b∣c)
Community content is available under CC-BY-SA unless otherwise noted.
Advertisement