The Octarians are octopus-like creatures that reside in Octo Valley, and serve as the antagonists in the Hero Mode of Splatoon. In this story mode, the Octarians are responsible for abducting various Zapfish, including the Great Zapfish that generates power for Inkopolis.

The leader of the Octarians is named DJ Octavio.

Most of the Octarians resemble tentacles of an octopus, or at least have tentacle-like traits. These tentacles, whether whole body or body part, are colored dark red and white, with white suction cups covering the dark red side of the Octarians. Despite their distinctive color, the ink they spray around are more of a violet red color.

With the exception of the Octolings and the boss characters, most Octarians have a distinctive face: bulging, lime green eyeballs, and thick, purple lips. Their eyes are rimmed with purple as well. 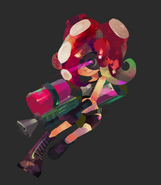 Octo Samurai, an Octarian boss in Splatoon 2
Add a photo to this gallery
Retrieved from "https://fantendo.fandom.com/wiki/Octarian?oldid=3324908"
Community content is available under CC-BY-SA unless otherwise noted.