The Obenesians are people who reside in Obenesia town, which is located in the Waterroad Kingdom. They made their debut in Super Luigi Odyssey.

They often wear black overalls with striped shirts underneath, along with straw hats. They often have handlebar mustaches underneath their round noses.

They, along with the Waterroad Kingdom, made their first appearance in Super Luigi Odyssey. When Luigi first arrives at their hometown they are under attack by a robot made by Bowser. Luigi needs to defeat the robot in order earn a Multi-Moon and save their town. Once the main story campaign is complete, they build a statue of Luigi and Helmer as thanks for saving their hometown.

Luigi and Mario in front of the statue that the Obenesians made. 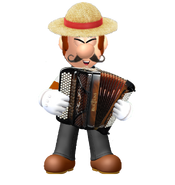 An Obenesian with an accordion

A Crazy Cap Obenesian
Add a photo to this gallery

Retrieved from "https://fantendo.fandom.com/wiki/Obenesians?oldid=2688499"
Community content is available under CC-BY-SA unless otherwise noted.