Fantendo - Game Ideas & More
Register
Don't have an account?
Sign In
Advertisement
in: The Threat Arc, Free to use Characters, What is the New Fantendoverse?,
and 18 more

Obena is a character that first debuted in Fantendo Smash Bros. Victory as a playable character. Obena is a alien ambassador from the now destroyed planet of Zezune, landing on Earth's Noah.

Obena is a pinkish red alien with white hair. Sticking out from her hair is two antennae that can harness 3D Wavelengths, allowing her to 3D print objects with her mind. She has moon shaped pupils, not unlike Unten's star shaped pupils. She wears a blue necklace around her neck as well as a coat/cloak that covers the right side of her body. She also wears golden head dressing pieces on her head. Around her waist is a string of black beads.

In recent stories, Obena is seen with less regal equipment on her, opting for simple hoodies. In U-Day! she wears a oversized black hoodie with a blue dress shirt under it. Obena seems to enjoy more causal clothing than her regal wear.

Obena is a rather sweet and often too trusting character, and usually is more of a follower than a leader due to her background. She does not like leading, as she feels it is not her job, but she tends to do a really good job with it if forced into the position. Obena is wary of sacrifice, often looking for alternatives even if she has no time to do so. Her inability to make snap decisions often leads to the worst outcome. Despite this, she is much more popular than Unten, much to the chagrin of Unten.

Obena also has a tendency to overlook her own abilities rather often in situations that are not battles, such as situations where she could offer her own 3D printed screws and nuts to fix the hull of her own ship. She is, however, learning how to use her powers in a practical environment. In U-Day! she vents some frustration about how she doesn't get out in the field very often, with much of her skills being hard to apply in a practical environment or others having powers that trump her's (Strafe's light powers vs her blade).

She tends to be blissfully unaware of issues plaguing others, although she is not completely out of tune with other's feelings. Like Unten, she tends to receive prophetic dreams shortly after the "death" of her planet, although the planet underwent a much different fate than what had been previously revealed to her.

Obena is gluten-intolerant; eating things with gluten will cause her tongue to swell up with pus and make it hard to eat for several hours and until the swelling dies. This does not seem to be a common trait among her species, as all other Zezuzians have been able to eat gluten just fine.

Obena is a ambassador for the planet Zezune, and can communicate in multiple languages. She was torn from her world when it was "destroyed", although she is unsure what caused to "explode". She crash landed on Noah, where Lock found her and intend to steal the ship to get into space, although this is kind of a hard task considering how much sand is in the thing.

It is revealed much later on that her planet underwent a major political change and that the explosion she thought had occurred to the whole planet was just her warped perception of what happened- in reality, the building that the rocket was in had a major explosion caused by her lift off. The damage had spread across multiple buildings. During the reconstruction process, the Doomuli came in for a peaceful takeover by paying for the damages and instituting a protected status on the planet. Obena was kept off communication for a mysterious reason, leading her to believe her planet had died.

Wanting to create a parallel to the plot of Fantendo - Genesis within Days of Victory by having Leah come across another crashed alien in Noah, ala how Unten Bluzen was introduced. The character would be the opposite of Unten in many ways but similar in other ways. Whereas Unten was more shaken up from Zeon's recent destruction, Obena is blissfully unaware of what exactly happened and is more innocent. The character was slowly developed over her dialogue in the story and she was given a unique power-set to make her moveset interesting.

Nycho and Obena were not originally going to be friends, but this was later altered as the story developed. Her usage of the word "Fantendo" was to finally give that word some meaning in the New Fantendoverse, which for years prior had allusions to but had no context within the universe. Her description of the word was how Helena Harper (t∣b∣c) felt best described both her relationships to people on the site as well as how the characters in the setting and narrative interacted with each other.

Obena possesses a sword that reflects and absorbs light known as Sovereign and has the power to 3D print small objects with the 3D Wavelengths produced between her antennae. She can only print in a material known as Plastisteel, which breaks easily over time and is only useful for short term situations. Sovereign can store light and shoot in the form of energy projectiles. She can also use her 3D Wavelengths to attack but this will shorten them out for a while.

Obena, as a ambassador for Zezune, also knows many languages and knows how to transcribe and translate for all of them. She has certain favorite words she will use from other langauges that she peppers through her speech.

As revealed later in Summer Dayz, all Zezunians produce a white skin over the front and back of their body that is known as Zezkin. This allows them to glide across wet surfaces and can be used to warm or cool their bodies in cold or hot weather. Zezkin is also able to be peeled off and can grow back. Most Zezunians do not peel back the Zezkin as it also hides the reproductive organs. 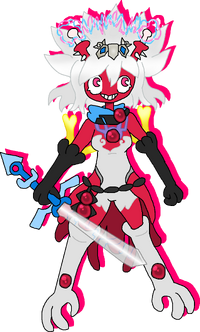 Hyper Form Obena was the full name of Obena's Hyper Mode form. While it has yet to appear in canon currently, it can be used to increase Obena's power and movement options. While this isn't a huge leap in power for Obena considering she's already one of the most versatile fighters in the group, this form mainly enhances her capabilities. For one, her antennae become further enhanced and present more powerful wavelengths to use against opponents as well as being able to construct much bigger objects with her printing powers. Her hands and feet gain an enhanced grip that allows her to wall jump and stick to walls and ceilings in general. She also gains more agility in water and her sword, Sovereign, spins around her while in the water, slashing at foes.

Her sword Sovereign also becomes larger in general. It is capable of absorbing as well as acting a reflecting guard for Obena as well. Unlike Imperium, which becomes Bleeding Imperium and seems to be under pain when used in Hyper Form, Sovereign gradually becomes charged with Hyper Energy and allows Obena to swing with charged sword strikes over time.

Obena's appearance changes drastically in this form. She takes on a darker red color and her hair becomes longer and stands up, which Nycho is quick to point out is similar to a Super Saiyan. She gains spikes on her antennae and her 3D waves become more intense. She gains thicker gloves and a pair of white boots that allow her to grip onto objects. From her gloves, two glowing appendages stick out on both sides, acting as new fins. Her Zezkin also becomes thicker and takes on the role of ornate material of higher quality.

Obena was introduced as a playable character in Fantendo Smash Bros. Victory on April 4th, 2017. She plays a major role in the plot, although isn't really as substantial as a lot of other characters.

Interviews with the Victorious

Obena's first interaction with anyone on Earth was surprisingly Leah Needlenam. While they did not have a very deep relationship, with Leah primarily using her to get back into space via her ship, she left quite the impact on Obena. Leah taught Obena how to dab, which she claimed was a sign of peace among humanity, which interested Obena given that she is an ambassador. Obena also taught Leah the word "Fantendo", which left an impact on her returning personality.

The two became quick friends during the events of Days of Victory. Obena and Nycho usually engage in shenanigans together or generally rib on each other. The two shared a crush on Faria Kamel, although she rejected both due to her lack of knowledge on the two. The two are frequently seen together during Days of Victory and their appearances afterwards, usually involved in a goofier and lighter subplot from the main story. Obena and Nycho enjoy watching Dragon Ball Z together as well doing dumb schemes together. Nycho cares deeply for Obena's wellbeing- in Happy Birthday, Unten!, Nycho went out of his way to make a gluten-free cake for Obena by researching gluten free ingredients and buying them in the middle of Unten's birthday party.

They consider themselves best friends. Their relationship is not romantic and will never be, as revealed in Truth and Train where this is brought up and rejected by both of them. Obena is mostly inseparable from Nycho, which has been a good and bad thing for her, as it means she has less opportunities to go out on field missions with Unten and his team. However, having a close friend to confide with has been a boon for her, keeping her personality relatively happy almost all the time.

Obena and Unten have a somewhat complicated relationship due to their similar backstories, but also due to how they are percieved by other characters. Unten, who has been through much what Obena has been through before, knows how hopeless her situtation is in terms of finding surviving members of her race. Unten also has a ton of jealously directed at Obena due to how she is treated by his friends and the world as a whole, embraced whole-heartedly as opposed to scorned. Obena does not see Unten as a rival for the same kind of attention and affection she gets, but Unten does.

Unten does not see Obena as fit to lead as well, as a major contrast to everyone else. Obena's optimistic attitude gives her a friendlier vibe as opposed to Unten's more jaded and developed sense of leadership, and Unten mainly sees Obena as a bad candidate for a leader as she is unable to make any kind of hard decisions. Unten doesn't hate Obena, but rather the attention and affection she gets.