Nuzleaf (Japanese: コノハナ Konohana) is a dual-type Grass/Dark Pokémon. It evolves from Seedot starting at level 14 and evolves into Shiftry when exposed to a Leaf Stone.

Nuzleaf is a bipedal Pokémon with light brown bulky thighs patterned with thin striations. It has two black dots on its chest. It has a pointed nose, a light brown mask, and a pointed pattern that extends to the back of its head. There is a green leaf on top of its head. A female's leaf will be smaller than a male. It does not like to have its long nose pinched, due to it losing power if it is grabbed.

It makes music with leaves, which strikes fear and uncertainty in people that are lost in the forest. However, it can also be used to comfort humans. It has an odd power that manifests as the move Extrasensory; its former signature move. It lives in forests and thick woodlands, and is skilled at climbing trees. It likes to come out of the forest and scare people.

Nuzleaf is probably based on an acorn, and possibly on Pinocchio. They may also be based on 天狗 tengu, tricky Japanese goblins who are known for their long noses, cruel tricks, ability to read minds, and the ranks of 小天狗 ko-tengu, tengu of lesser rank. 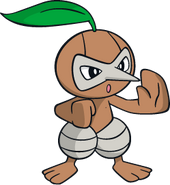 Generation VI
Add a photo to this gallery
Retrieved from "https://fantendo.fandom.com/wiki/Nuzleaf?oldid=3200136"
Community content is available under CC-BY-SA unless otherwise noted.