Nosepass (Japanese: ノズパス Nosepass) is a Rock-type Pokémon. It evolves into Probopass when leveled up in either Mt. Coronet, Chargestone Cave, Kalos Route 13, or New Mauville.

Nosepass is a blue, angular, hard bipedal Pokémon that closely resembles the Easter Island Heads. Its bright red, triangular nose is highly magnetic and slightly resembles a 3D arrow. This nose functions as an electromagnet and always points north. It has arms and legs without any visible joints and small, circular holes on the undersides. Its arms resemble compass needles. It has similar circular holes on the sides of its head. Its eyes, covered by dark, somewhat mask-like markings, have the appearance of being closed

Nosepass cannot go near others, since it would repel them with its magnetic nose. Its magnetism is stronger in cold seasons. To protect itself when in danger, it raises its magnetism and draws iron objects to its body. This technique is also used to capture prey. Nosepass only moves a little over 3/8 of an inch each year. It lives in caves. 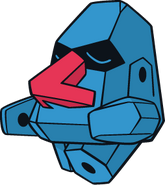 Generation VI
Add a photo to this gallery
Retrieved from "https://fantendo.fandom.com/wiki/Nosepass?oldid=3200147"
Community content is available under CC-BY-SA unless otherwise noted.