Noah T. Koopa is a very unique Koopaling that appears in newer Mario games and has recently appeared in recent YE games and is the second revealed main character in The Lane Chronicles. Noah comes from an alternate reality that exists somewhere deep in the depths of the plain of existence. Like YoshiEgg Nook, McBoo, and some other characters, Noah exists in both Nintendoverse & Fantendoverse canon. In this alternate universe, the events of Super Mario Bros. 3 never happened. Therefore, none of the Koopalings we know today existed except for Larry & Morton Jr. (They're a bit different than the regular Larry & Morton, however.) Noah also existed along with the alternate universe versions of Larry & Morton Jr.. Since Super Mario Bros. 3 never happened, it made drastic changes in what we refer to as the Mario timeline. Changes in the timeline included Tatanga never being born, (Therefore preventing the events of Super Mario Land from ever occurring, though Peach still met Daisy in the future) Wario significantly rising in power, the events of Luigi's Mansion never occurring, the events of Super Princess Peach never occurring, and the beginning of Super Mario Galaxy being changed drastically. Noah finds his way into the Nintendoverse as a result of one of Ludwig's inventions going haywire. So, Noah (without alternate Larry & Morton) meets his brothers-and-sisters-who-would-have-been and his father from the same mainstream Marioverse. Noah is one of the strongest Koopalings and also one of the smartest in terms of logic and strategies.

After The Koopa Troop...

Noah Koopa worked with Bowser & co. for quite a while after his arrival in the mainstream Marioverse. For a short time, he even commanded a branch of the Koopa Troop. (The sub-types of Hammer Bros., Thunder, Boomerang, Fire, etc.) He and the Koopalings got along decently well. So, why was Noah feeling so empty inside? Was it homesickness, or was it something deeper? One day, without any warning, Noah announced that he was leaving for a short time to "find himself". So, Noah ventured out in The Mushroom Kingdom, trying to be unseen by it's inhabitants. On his journey, Noah makes an encounter with none other than YoshiEgg Nook. They begin to "chat", and YE was completely unaware that Noah was a Koopaling at all, let alone evil. During their otherwise short chat, Noah & YE became friends. However, most importantly during this chat, Noah realized what it was like to be good. After leaving YE's shack, Noah had a change of heart. Noah suddenly turned over a new leaf. He had to be good; It felt right, like it was his destiny to be a great hero. Noah was ashamed to tell his family this, but he had to go. So, he got a messenger Paratroopa (Parakarry, actually) to deliver a letter to the Bowser family about his resignation. When his family saw the letter, they were shocked. They didn't want another one of their own against them like Jacob Koopa, so they set out to find him and bring him back.
More to come...

In his times with the Koopa Troop, Noah was normally mischievous and evil as the other Koopalings were, but he never took it too far. As mentioned above, Noah is one of the smartest Koopalings in terms of logic and battle strategies. When he commanded the sub-species' of Hammer Bros. during his membership of the Koopa Troop, they were always the top ranking faction.

Noah can breathe Fire and Ice, and can also retreat into his shell and spin when needed. He also has immense strength. 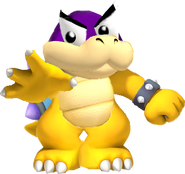 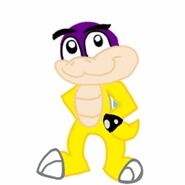 His appearance in Super Fawful Adventure. 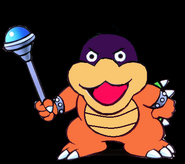 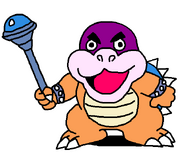 His 2D design redrawn by Aiva
Community content is available under CC-BY-SA unless otherwise noted.
Advertisement