Fantendo - Game Ideas & More
Register
Don't have an account?
Sign In
Advertisement
in: Characters, What is the New Fantendoverse?, Nizzle and Zorp,
and 4 more

This article is about the character. For the game, see here. For the series, see here.

Several years ago, in a planet named Bionia, various species lived together in tranquility. Nizzle, who was a homeless orphan, lived on the streets, begging and stealing from various citizens for resources. One day, Nizzle, who was masked to prevent himself from being kidnapped, stole from a local market, being chased down by the police. He escaped, but nearly got ran over by a car, although a strange blue creature saved him.

The strange creature, named Zargo (member of the Zorlorp species), was out for a stroll when he noticed Nizzle in trouble. He immediately went to his rescue, nearly risking his life to save the young fellow. Zargo's family, which consisted of Zorp (his younger brother), Zelly (his mother), and Zento (his father), decided to take Nizzle in, and him and Zorp soon became best friends.

Nizzle and Zorp often went on adventures throughout the many ruins, jungles, and mysterious locations nearby their city; they knew of the danger, but Zorp revealed his ability of Cosmokinesis, which was potentially devastating but equally powerful. Nizzle himself was once bit by an Electroxite; an unusual, rare creature whose bites had a small chance of giving control over electricity to their victim. And that was exactly what happened to Nizzle. Nizzle then found a drill which they used often; he used this drill to find an ancient, sacred artifact known as the Time Rod, which had the ability to travel to any time in the universe.

Nizzle and Zorp, being the mischievous duo they are, often misused their powers and Time Rod. They got it locked away for about 2 years, due to them needing time to mature and realizing what danger there is in messing with time. They eventually got it back, however.

They then continued to adventure, finding more artifacts along their journeys.

Nizzle is a rather hard-to-describe individual. On the outside, he's a pessimistic, lazy, and introverted person; however, if you really get to know him, he can be kindhearted and loyal to you. Nizzle has great street smarts; he has great reaction and is fairly creative, so he tends to get himself and company out of any difficult situations they are stuck in.

Zorp is a...unique case. He's very unusual; his sentences are almost barely understandable, and he speaks about the weirdest things on the planet, without staying on-topic at any time of the day. He's very talkative as well, which can be a problem a lot of the time. He is extremely impetuous to add to this, which makes him come off as insensitive, hurting others. He is also known to be very forgetful, and generally lazy as well.

Nizzle is the bottom creature. Nizzle is a gray creature with a usually-worried look on his face and green eyes. Despite his generally large (and more recently, circular) body, he has short arms and legs. His mouth is recently shown to be jagged, although it was previously in a natural shape. Recently, his head is also flat.

Zorp is the top creature. Zorp looks very unusual; his head consists of two long stalks containing his eyelids on them, with his eyelids being short but relatively long. He also has a quite large mouth on his face, with nothing else. His lower body consists of a fish-like tail, with the connection to his body being somewhat long. He also has two arms under his head. He is quite shiny for an unknown reason, and is often damp when touched.

Amy and Nizzle are pretty much friends; they don't interact often but they seem to like speaking when they end up doing so.

Amy is seemingly disturbed by Zorp; this is likely due to Zorp's erratic personality and lack of a serious attitude, even when necessary. He also managed to almost crush Amy with a moon. Zorp finds Amy really cool, however. 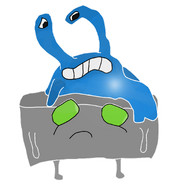 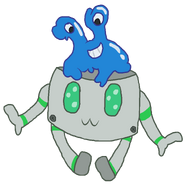 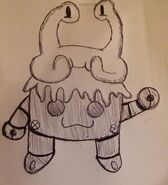 Nizzle and Zorp hiding in a costume by Shadow Inferno (t∣b∣c). 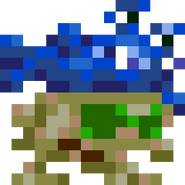 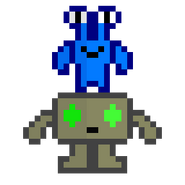 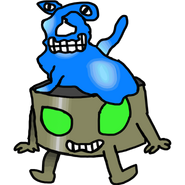 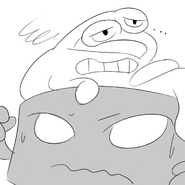 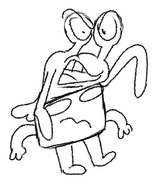 Nizzle and Zorp by SkyboundScratchkat (t∣b∣c).
Community content is available under CC-BY-SA unless otherwise noted.
Advertisement