The Nintendo Super Switch is a console developed by Nintendo and Isurus Multimedia Industries. Developed as a successor to the Nintendo Switch, it is a competitor to the Xbox Series X and the PlayStation 5.

The idea behind the Super Switch is to continue the success of the Nintendo Switch. Much like it's predecessor, it is a hybrid console, swapping between a home console and a handheld when needed. Unlike the Switch, however, the Super Switch has processing chips in both the handheld, the dock, and the controllers, working around the original Switch's lack of power in comparison to it's competitors, while retaining it's power while in handheld mode.

The console released on November 2nd, 2023, though support for the Switch still continued into early 2025, and many games developed for the Super Switch have forwards compatibility with the original Switch.

The Super Switch first started development when Isurus Multimedia Industries approached Nintendo with various plans, including what would eventually become the Super Switch. Nintendo desired a stronger console, as the Switch was beginning to lag behind the PlayStation 5 and Xbox Series X. While the Switch itself was still going strong, Nintendo feared that sales might start to drop at any minute. As a result, they eagerly accepted Isurus' ideas.

The Super Switch was first teased at E3 2022, during a panel of the Direct detailing Nintendo's new development partner, Isurus, and their future plans. Isurus President SharkLord stated that "We're working on some pretty big things. We've got games for existing IPs, totally new IPs, maybe even a console or two."

This sent the internet into a frenzy of speculation, which only heightened during The Game Awards of 2022, where the Super Switch's logo was shown. The hype and speculation eventually boiled over when the Super Switch was finally revealed at E3 2023.

The E3 2023 Nintendo Direct focused mainly on the reveal of the Super Switch, showcasing what it shared with the Switch, such as it's hybrid console status and usage of cartidges, as well as unique features, such as 4K graphics, backward and forward compatibility, and multiple processing chips spread throughout it's different components. It also revealed many crowd-pleasing reveals for new games and ports.

During the reveal, SharkLord stated that "Nintendo has a habit of creating something fresh and new, then moving on to something else when the next generation swings around. That brings out innovation in every creation, but it also abandons some really good ideas. They struck gold with the Switch, so this time we wanted to improve upon it, make it the best it can be."

Amusingly enough, SharkLord also demonstrated the Super Switch's durability, a staple of Nintendo consoles, claiming that it was "Pure Nintendium". Specifically, he punched and stomped on a unit multiple times, then attempted to play using the console. When the console was proven to still work fine, he then shouted "PURE NINTENDIUM!" at the top of his lungs. The event was widely memed across the internet, and brought the console a good deal of publicity.

The Super Switch was given a solid marketing campaign. Nintendo named the console to continue the success of the original Switch, but but they also wanted to avoid the issue the Wii U had, where the name was too unclear. The name was also chosen as a homage to the Super Nintendo Entertainment System/Super Famicom.

The marketing put an emphasis on the updated graphics and backwards compatibility, with the main ad featuring a shot of a group of friends playing with controllers spanning from the Wiimote to the Super Switch's controller, the Super-Con. It was also notably easy to understand about what the Super Switch was, making it clear that it was a successor and not an add-on or mere upgrade

Nintendo was sure to make sure there was something for everyone, with a mix of family-friendly and mature titles. This was best exemplified by the Super Switch's three main launch titles: Kirby Sea Stones was a cheery title aimed at younger, more casual players, Harbor Wave was rougher and "cooler," appealing to somewhat older consumers, and Scorched Road was a violent action game made for older audiences. 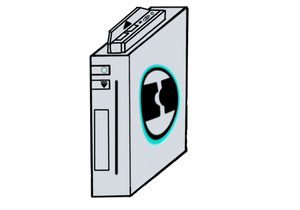 Visually, the Super Switch has been described as a combination of the Wii and the original Switch. The dock, or the main console, is a somewhat-thin rectangular box with the Super Switch logo on the side. The front of the dock is designed similarily to the Wii's, having a power button, an eject button, and an SD card slot, as well as a disc reader for Wii and Wii U games. The top of the console has an open slot for the handheld to be inserted into.

The Super Switch as a console is one of Nintendo's most powerful, being the first to consistently play 4K graphics, as well as easily managing 1080p, 60fps playback. This is achieved by containing three different processing chips-One in the handheld device, on in the dock, and one in the controllers. SharkLord described the power of the chips by comparing them two the Switch's, as a throwback to the Wii's description as being "As powerful as two GameCubes duct-taped together." 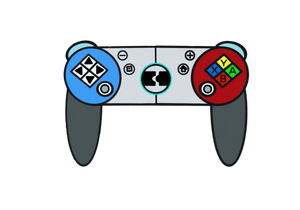 The Super Switch's controller, known as the Super-Con, has been described as "Joy-Cons crossed with a DualShock 2", though it is relatively thinner in comparison. The Super-Con has more or less the same buttons as the Switch, though with some differences in layout and design to differentiate it from it's predecessor.

A feature unique to the Super-Con is shape of the face buttons; Rather than the standard circular design, the buttons are diamond-shaped, and placed closely together. According to SharkLord, this was to "Open up more possibilities with the inputs of pressing more than one button, as well as to make it stand out from the competition."

The Super-Con supports wireless charging, both on a dedicated charging station and through the Super Switch handheld. The Super-Con also has an accelerometer, a gyroscope, and an HD Rumble feature, much like the Joy-Cons. 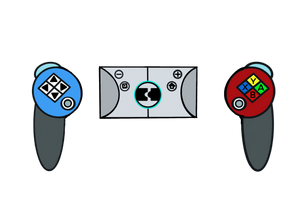 The Super-Con's buttons has the following buttons: 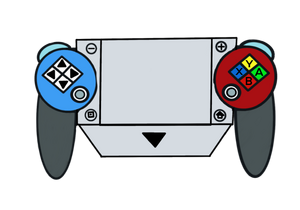 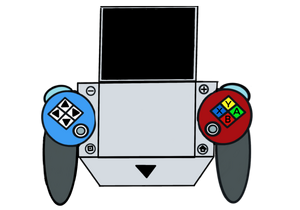 The handheld takes the form of a clamshell design, much like the Game Boy Advance SP and the DS/3DS lines. The handheld itself is slightly larger than the 3DS XL, though the screen is substantially larger in comparison, due to taking up more of the top half.

The handheld has all of the Super-Con grip's buttons, albeit arranged slightly differently, as to better accommodate the different proportions of the handheld in comparison to the Super-Con. The most notable change is the Center button; Rather than being a single large button in the center, there are instead two small buttons close to where the Super-Sliders would go.

Software and Other Features

The Nintendo Super Switch comes with a wide variety of software to increase your enjoyment, from the eShop to the Nintendo Bounty program.

In response to the critical reception of the Switch's UI, the Super Switch's menu is a good deal more distinct and customizable. The menu is designed more like the Wii than the Switch, while also adding folders and themes, much like the 3DS. In addition, the home screen has a cycling bar that shows off all the latest news and new releases, giving everyone some much-needed publicity. Lastly, some games have multiple menu icons that can be changed at will, in case there's any special occasions the developers wish to commemorate with a variant.

The Super Switch, like other recent Nintendo consoles, has access to the eShop, where you can download games onto the system. Aside from downloading games, you can also download items to customize your avatar (See below), music, themes, and more. After buying anything that requires money, you recieve Gold points, which function much like on the original Switch. Each Gold point equates to a single cent in USD, and can be used alongside real money in your purchases.

The Super Switch eschews Nintendo Switch Online in favor of free online play and the triumphant return of the Virtual Console, with games spanning all the way back to the Color TV-Game, all the way to the GameCube, as well as other consoles, such as the Sega Dreamcast, the Neo Geo, and even the original PlayStation!

The Super Switch can be used to surf the web, much like a computer. One can use it to check Wikipedia, watch YouTube, and even edit Wikia, with a specially-designed editor made specifically for the Super Switch.

The Super Switch drops Mii support in exchange for a more customizable avatar, with editable art styles, proportions, and appearances, giving options like 2D or 3D, human or animal, how many limbs you want, and even turn them into a Mii, if that's your thing. As stated above, you can download various items to customize your avatar with. Most are free, but some require Gold point to purchase, while other are only obtainable by purchasing a certain game.

The Super Switch can also be used to dowload music. One can download a games' soundtrack off the eShop on it's own or with the game it came from. Aside from game OST, you can also buy the albums and singles of various music artists.

The Nintendo Super Switch supports a variety of subscription streaming services, like Netflix and Disney+, for free.

The Super Switch supports a paid-membership program known as Nintendo's Bounty. Nintendo's Bounty allows one to play a limited selection of games for free, for only $9.99 a month. The games of Nintendo Bounty consist of a half-dozen of Virtual Console games and indies each, three moderately small first-party and third-party titles, and the "Holy Grail:" A single big release Nintendo is trying to push. If you like the games, you can purchase them at a discount, usually somewhere between a quarter and two-thirds of the original price.

Unlike previous Nintendo systems, the Super Switch sports an achievement system, granted by completing tasks in various games. Each achievement will give you a certain amount of points, with no cap given that is humanly possible. The levels of achievements, listed below, are are named after various levels of console graphics. The different achievement levels are:

Any page that has [[Category:Super Switch Games]] on them will be added here after a purge or edit. If you wish to put a game on the Super Switch, just ask SharkLord1954 (t∣b∣c).

The Super-Con's original method of splitting.