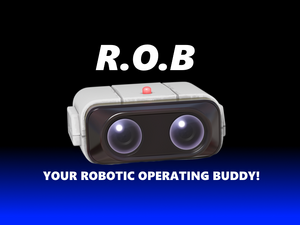 The Nintendo R.O.B 2.0, also known as the "Nintendo Robotic Operating Buddy 2.0", is a peripheral designed for the Nintendo Switch and Nintendo 3DS. R.O.B is the second model of R.O.B, the first being used on the Nintendo Entertainment System. This new version of R.O.B is boosted with extra content and functionality, including an Alexa-style voice command feature, a Joy-Con charger, an Amiibo reader, and more.

The R.O.B is compatible with any Fantendo game you wish, so feel free to add functionality to R.O.B for your game.

R.O.B is heavily updated, obviously. He now, instead of purely being a spare controller for Gyromyte, he now lives up to his name as a full fledged Robotic Operating Buddy. R.O.B is a gaming companion, now, with functionality for searching for guides, and giving tips and tricks. He has a speaker which allows him to speak and play music. His voice is a stereotypical robot voice to fit his demeanor, speaking in a "beep boop i am a robot." manner. He does have a bit of an attitude, though.

R.O.B connects via Bluetooth to the Nintendo Switch.

Like his predecessor, he can move his arms and swivel around in order to emote at some points. His arms double as a Joy-Con Charging Dock. He requires a charge to function, but he comes with a USB charger in which he can connect to the wall at any point. He has a battery life of 40 hours, so charging shouldn't be that much of a problem. He also powers off after being left idle for too long. You can tell how much power he has left from the large "power gauge" on his chassis, like the one that signifies his fuel in his appearance in Smash Bros. R.O.B has L.E.Ds in his eyes, just for show. His eye color changes based on the colors of the Joy-Con he has connected (i.e if his left Joy-Con is green and the right one is red, the his left eye will be green and the right one will be red). If he has no Joy-Con connected, L.E.Ds simply do not show.

R.O.B also has an NFC touchpad atop his head, allowing for players to scan Amiibo figures. R.O.B will then gain the ability to do his best "Impression" of this Nintendo character (which is fully voiced by the original character's voice actor) via voice command.

Arguably R.O.B's most important feature, R.O.B possesses the ability to take voice commands. He has a lot of answers, including-

Initiating R.O.B is as simple as saying "Hey, ROB". Some apps even have more complex features for opening, such as "Hey, ROB, open Hulu and resume My Hero Academia."

All R.O.Bs come with a download code for software titled "R.O.B Games." This section allows players to play games with their Robotic Operating Buddy, both in real life and on the screen. During this, R.O.B gets the ability to move around, so it is advised that players put R.O.B on a flat surface before initiating a R.O.B game. There are multiple R.O.B games-

Free to edit! Anyone can add to this, provided they follow our rules and don't add bad joke content.

This is a list of commands that R.O.B can take vocally.

Feel free to add your own games to this list! Splatoon 2

Any games with the category "Games compatible with R.O.B 2.0" will appear here.

Retrieved from "https://fantendo.fandom.com/wiki/Nintendo_R.O.B_2.0?oldid=2889760"
Community content is available under CC-BY-SA unless otherwise noted.