“Now you're playing with power!”
— Advertisement slogan for the NES.

The Nintendo Entertainment System (abbreviated to NES) is a video game console created by Nintendo in the third generation. It is the western version of the Family Computer (also known as the Famicom), which released in Japan two years prior. Games are inserted in the NES by opening a door at the front and sliding the cartridge inside, while cartridges were inserted through the top on the Famicom, similar to the SNES. The NES was originally supposed to be a 16-bit console with floppy discs as media storage, but then-Nintendo president Hiroshi Yamauchi wanted it to have a broader appeal, so it was instead made into a cheaper 8-bit console that used cartridges rather than discs. Notably, the main colors of the NES were white, gray, and black, while the colors of the Famicom were gold, red, and black.

The NES saved the video games industry following the video game crash of 1983, and rivaled the SEGA Master System and Atari 2600 until its successor, the SNES, ushered in a new generation of video game consoles. Both the NES and Famicom sold a combined total of 61.91 million units worldwide during their lifetime. Both were discontinued in 1995.

In America, the NES was sold in three packages:

The NES and Famicom hardware consists of a 2 kilobytes of onboard RAM, a custom source MOS Technology 6502-based processor, which has a built-in sound generator on chip and is used as its main processor. This processor contains five channels of sound: one triangle channel, two square wave channels, one noise channel, and one DPCM channel for playing samples of memory.

The NES and Famicom's Picture Processing Unit (PPU) is responsible for generating the sprites and background images on-screen. Graphical and sound capabilities and extended RAM can be extended by use of memory mappers such as the MMC2, 3, 4, 5, among others. For example, the MMC5 adds two extra pulse wave channels and another Raw PCM channel in addition to the main channels. These memory mappers are used for more complex games for the extra utility and power; examples include Super Mario Bros. 3 and Mike Tyson's Punch-Out!!.

During the NES' lifespan, a new model of the console called the New-Style NES, also known as the New NES or by its model number NES-101 was released in late 1993. This was a compact, cost-reduced model that notably came with a new controller, and cartridges were inserted at the top similar to the Famicom and later the SNES. The controller also received a redesign, which also bears resemblance to that of its successor.

The NES controller is the basic controller that comes with the console. It has a uniquely square, brick-like design and features a directional pad, A and B buttons, a start button, and a select button. The New-Style NES had a redesigned controller, which as mentioned bears a resemblance to the SNES controller. Often called the "dog-bone controller" due to its shape, it also had elements of the Game Boy, namely the button shapes and their layout.

The Famicom controller had a similar shape and design, but was different in many ways. Unlike the NES, which had detachable controllers, the Famicom's controllers were connected to the main unit. However, they could be stored in small slots on either side of the console. Player One's controller had the ability to pause the game, while Player Two's controller instead controlled the volume. The NES controllers lacked the latter feature.

The NES Zapper was a light gun accessory. While it was only used for a handful of games, it's most notably compatible with Duck Hunt. Some packages also came with an NES Zapper. The Zapper has made a few appearances in Nintendo games, such as being the basis for the N-ZAP weapons in the Splatoon series. It also appears in the Super Smash Bros. series as part of Duck Hunt's moveset (though the Zapper itself is never seen in-game, it appears in the reveal trailer for Duck Hunt in Super Smash Bros. for Nintendo 3DS / Wii U).

The NES Zapper was originally gray, though since a soldier mistook it for a real gun, Nintendo later rereleased it with an orange coloration.

The Power Glove was a handheld glove controller that used hand movements via conductive ink. It also had a keypad that defaulted certain buttons to certain hand movements, and underneath the Power Glove were the buttons for a normal NES controller. It sold poorly and was infamous for being extremely imprecise, and thus it flopped. Its failure later became a meme.

Over time, pins inside the NES and its game cartridges would get dirty and start malfunctioning. As a result, Nintendo released a cleaning kit to improve the condition of the contacts so games could resume uninterrupted, as well as fix any visual glitches.

Announced July 14, 2016, the NES Classic Edition (Nintendo Classic Mini: Family Computer in Japan) is a smaller version of the Nintendo Entertainment System, and the first of Nintendo's Classic series, releasing November of that year. Unlike the original NES, the NES Classic Edition doesn't support cartridges, but rather features a collection of 30 pre-installed games, including Super Mario Bros., Donkey Kong, Metroid, and The Legend of Zelda. Interestingly, the Famicom version has a different lineup, notably replacing Donkey Kong Jr. with NES Open Tournament Golf. A special gold version of the Nintendo Classic Mini: Family Computer was also released in celebration of the anniversary of Weekly Jump. 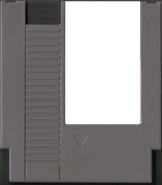 Any page that has [[Category:NES Games]] on them will be added here automatically.