The Nintendo DSGo is an upcoming mobile handheld video game console developed by Nintendo, set to release in late 2020. Nintendo says that the DSGo is an attempt to provide the highest quality mobile gaming experience through powerful, mobile gaming focused hardware, similar to previous attempts by Nvidia.

Compared to the Switch, Nintendo says that the main difference lies in the fact that the Switch was intended by brief periods of mobility, whereas the DSGo is based around constantly being used outside of the house. The system currently has no competitors in the market.

The DSGo leaves behind the clamshell design of previous DS models and instead opts for a single capacitive touchscreen on the front as well as a much simpler resistive screen among the buttons similar to the Touch Bar on a MacBook Pro. Rather than closing upon itself, the second screen and buttons slide into the system, allowing for the device to become only the one screen similar to a phone while quickly transforming into a fuller device that resembles previous systems unfolded.

The top screen outputs at a native 1080p, while the other is at a much smaller 480p. The top screen, due to being relatively small, has a larger DPI than the Nintendo Switch. This boost comes from the smaller screen, the new technology developed since the 2017 launch of the Switch, and the omission of the JoyCon technology as well as things like motion control and rumble. Nintendo announced that their goal was to remove as many needless features as possible to create a pure gaming experience.

One of the most advertised features is the ability to connect a SIM card for online 5G internet play. Nintendo advertised the system of being capable of playing games like CS:GO and Splatoon online over data without lag or disconnects.

In its default state, the Nintendo DSGo resembles a small phone. The only buttons available are the power button and volume buttons on the side. In this state, the user can interact with the device through touch, which can often be used to navigate games on the system without the use of buttons. To access the Home menu, users can swipe up on the edge of the screen, then tap the Home icon that appears, or the Screenshot icon to take a screenshot. 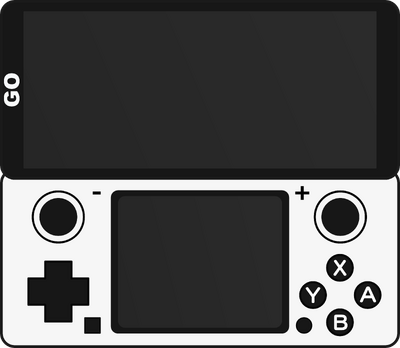 The user can slide out the bottom of the console to transform it into a gaming device. The front of the console now had four face buttons, called A, B, X, and Y, two control sticks, a d-pad, + and - buttons representing the usual Start and Select options, a Screenshot button, and a Home button. The user is also able to utilize the smaller capacitive touchscreen on the bottom, as well as the two shoulder buttons on each side, one of which acts as a scroll wheel for navigating menus.

In order to sit flat for sliding the face of the console, the control sticks can be compressed by pressing down on them, or expanded by doing the same. This function means that the control sticks can no longer be pressed in as a method of control. Other than the lack of pressing function for control sticks as well as the lack of motion control on the default model, the DSGo is capable of all of the methods of control available on the Wii U and Switch, in addition to new methods such as the bottom touch screen and shoulder scroll wheels.

Both the top and bottom screens act like a touchscreen, although only the top screen is a traditional capacitive touchscreen like on the Switch. Instead, the bottom screen is a smaller resistive touchscreen, functionally identical to the 3DS, with one key difference, which is that it only illuminates when needed. As such, it often functions similarly to the touchpad on the DualShock 4, allowing touch control without being a screen. Nintendo suggests that developers only use the bottom screen for visuals when necessary, such as when emulating or adapting DS, 3DS, or Wii U titles to the system; thanks to this, the majority of games can be played using an external controller with a touchpad, such as the DSGo Pro Controller, without losing access to extra visuals.

The console runs an original OS designed to work with full compatibility with Unity, Unreal, and other common engines. As such, porting games to the system is fairly easy, as intended by Nintendo. The system utilizes cartridges with solid state technology, allowing for quick loading. Because of the different cartridges, the system does not support physical backward compatibility with the 3DS or DS, but it does allow for the download of every 3DS game available on the 3DS eShop. Additionally, DS, Game Boy Advance, and earlier games available under the Retrovia service.

In 2020 Nintendo released the first test runs of the FanMod service, which allowed for fan developed modifications to be tested and run by players in-game. It was first authorized for use with The Elder Scrolls: Skyrim, a game with a long and well-known history of player-made modifications, and it was such a resounding success that Nintendo greenlit further develop for other titles. Bethesda allowed the FanMod service to be activated on all of their released on the console by the end of the year, as did many other companies.

The system uses Retrovia for classic games, an online subscription service that streams classic games over the internet, making use of the system's wireless digital capabilities for constant streaming access.

When Nintendo released the Nintendo Switch in 2017, it was rife with hardware failures. The Joy Con devices used as controllers were crumbling in peoples hands within weeks of release, and soon it was discovered that the console had a fatal error which was causing it to heat up until the screen melted off. In one notable case, a house burnt down due to the Switch's malfunction, killing two children. As a result the media took to the news as the worst hardware failure ever, with large scale boycotts leading to the worst performance of a console in Nintendo's history having sold less than a million units by the end of the fiscal year.

With stock falling rapidly, Nintendo released an official statement apologizing for the disaster and announced that they would focus exclusively on portable consoles for the future. They continued to support the Nintendo 3DS for many years, as well as furthering their portfolio in the mobile market with explosive titles such as Fire Emblem Heroes continuing to keep them afloat. Looking for capital for future endeavors, they made front-loaded contracts with multiple movie studios to develop films with their properties, resulting in a video game movie renaissance.

At E3 2020, Nintendo finally revealed their next console, the DSGo. In order to avoid connections with the Switch, they pushed the DSGo as a next-generation portable device that would compete indirectly with the upcoming Xbox Series X and PlayStation 5, rather than a new home console. They also stressed that it would not be able to connect to the TV, but that it would highest definition console-level graphics available on a portable device in the market. This focus on being portable resulted from their success under the 3DS while their console flagships failed.

To further excitement, Nintendo also announced their partnership with Samsung, which would allow them to have integrated 5G capability in the DSGo at launch. This would allow gamers to play their favorite online games anywhere they had data with essentially no latency, allowing for a seamless experience in and out of the house.

If you want your game on the DSGo, simply add [[Category:Nintendo DSGo Games]] to your article. Publishing games for the Nintendo DSGo and adding them to the category is open for any developer without needing to ask permission. 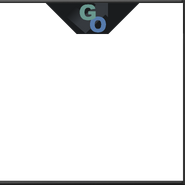 This page was written by .lennongrad (t∣b∣c). Feel free to copy any code used on this article or the templates within; no permission needed! And make sure to have a good day :)
Retrieved from "https://fantendo.fandom.com/wiki/Nintendo_DSGo?oldid=3286167"
Community content is available under CC-BY-SA unless otherwise noted.