Nintendo Classic Collection is a collection of classic Nintendo games from the 80's and early 90's. The game features many classics like Super Mario Bros., Legend of Zelda, Metroid, Punch-Out!!, and much more. The game is developed by HAL Labs and Master Productions Inc. and published by Nintendo. There are some differences with the games. One is that in most collection of games they change the graphics like for example Super Mario All-Stars!, but in this collection the games they have there original 8-bit or 16-bit graphics. Two is that if you are playing a game on the Game Boy you can decide what you want color or no color. The collection has 28 games most of them are default but some of them are unlockable. This collection of classic games is for the Nintendo 3DS and the Wii. Nintendo Classic Collection is Rated E and was released worldwide in May 16, 2011.

When you start the game it shows a roster of all the default games. The question marks are the unlockable ones and if you unlock all the games you win a Nintendo trophy. As you beat games you get trophies of the main character in the game, for example in Super Mario World when you beat it you get a trophy with Mario riding Yoshi and with Star Fox you get a trophy with Fox on it. If you ever beat all the games in the entire collection a screen will pop up saying "You have beaten every single game in Nintendo Classic Collection" and you can also be able to read a story on the history of Nintendo and how did it become so popular.

Pikachu Trophy (Use Pikachu in 42 battles in Pokemon Red/Blue)

Kirby Trophy (Beat Kirby's Dream Land 1, 2, or 3)
Add a photo to this gallery

A full gallery of artwork from the game 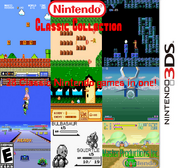 3DS boxart
Add a photo to this gallery
Retrieved from "https://fantendo.fandom.com/wiki/Nintendo_Classic_Collection?oldid=1639446"
Community content is available under CC-BY-SA unless otherwise noted.