Ninetales are a species of Fire-type Pokémon introduced in Generation I. They evolve from Vulpix when exposed to a Fire Stone. Most people believe that its nine tails are imbued with a mystic power. Its life-span can be up to a thousand years.

It has an Alolan form that is Ice/Fairy-type. Alolan Vulpix is also Ice-typed, and needs to be exposed to an Ice Stone to evolve into Alolan Ninetales.

Ninetales are fox-like Pokémon. Its most notable feature is its nine tails, each of which is tipped orange. Their fur is golden-white and they have a fluffy crest atop their heads and a similar ruff on their neck. They have shiny red eyes. 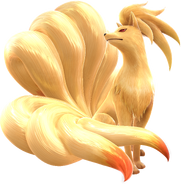 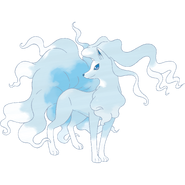