Nimvesa is a young toad who assists Mario on his journey throughout the kingdoms in Super Mario's Split Kingdoms. She is the first helper Mario gains, and she wears two badges, one of which is on her permanently. She gives Mario the ability to double jump.

She was bullied as a very young toad as she had somehow been born with the lightning bolt badge on her for permanence. She is quite fearful and lacks confidence at the beginning of the game, but by the end of the game, she has incredible courage and is completely confident in herself. Rumor says that she went on to become a renowned paraglider after her adventure with Mario.

She can double jump, transferring it to Mario at the beginning of the game. Throughout the game, she occasionally demonstrates that she has a simplified version of reading minds.

the original image for Nimvesa 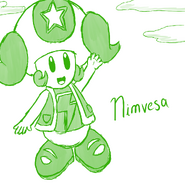 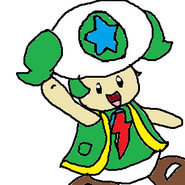 Retrieved from "https://fantendo.fandom.com/wiki/Nimvesa?oldid=3155986"
Community content is available under CC-BY-SA unless otherwise noted.