Nightmare, also known as Nightmare Wizard, is a final boss character and major character in the Kirby series, despite only making three major appearances in the games. His goal is to spread dark nightmares and influences throughout the galaxy, and uses his cunning wit to accomplish the feat.

In his debut, Nightmare is responsible for corrupting the Fountain of Dreams and attempting to spread his nightmares all across Dream Land. King Dedede tries to stop Nightmare from succeeding by breaking the Star Rod, but Kirby unwittingly summons Nightmare when he returns the Rod to the tainted Fountain, and has to defeat Nightmare before his evil plans become reality.

Nightmare first rose to prominence in Kirby: Right Back at Ya!, securing the role of the show's overarching antagonist. He acts clandestinely behind the scenes through his company, Nightmare Enterprises, to attempt to take over Planet Popstar and conquer the known universe.

Nightmare has had notable appearances in Kirby's Adventure, its remake, and Kirby Mass Attack, and has been featured in a number of cameos in other games.

Nightmare initially manifests as a Power Orb. In this form, Nightmare is a dark sphere covered in silver, glowing stars. A gradient runs across the sphere: the top of the sphere is dark blue while the bottom is dark pink. In a number of early appearances and artwork however, the sphere is simply pitch black and colorless.

His real form is that of a wizard (though his sprite in Kirby's Adventure slightly resembles Count Dracula) donned in a spinning, tornado-like robe. In the official art for Kirby's Adventure and the anime his robe is covered in stars just like in his first form, but in the actual games, Nightmare's cloak is simply a dark purple robe. On his face, he wears a pair of shades with a single black-chromed lens that flashes. Underneath his cloak lies his weak spot, a wildly-twisting accumulation of darkness. Above his robe, Nightmare wears silver pauldrons and a small red medallion around his neck (sometimes obscured by his chin in-game). In the games Nightmare has human-like teeth, while in the anime his teeth are sharp and jagged. According to official artwork for Kirby's Adventure, Nightmare has thin bony arms, though this characteristic was not included in later installments of the series except for the anime.

In Kirby: Nightmare in Dream Land, Nightmare's second form is slightly changed. He now has a total of four shoulder pads instead of just two, and much longer horns on his helmet. His chain and medallion are also now consistently visible during the fight. There are also two more jewels on his headpiece. This game's design also reflects a notable decision made to his size in Kirby: Right Back at Ya!, in which he dwarfs even the Halberd. In accordance to the show, he is also almost as tall as the screen now.

His design in Kirby Mass Attack takes a number of visual cues from his design in Kirby: Nightmare in Dream Land, though his shadowy cloak no longer conforms to the shape of his tornado-like core and instead bears more resemblance to the original shape of the cloak as seen in his artwork for Kirby's Adventure. 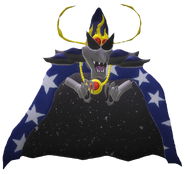 Nightmare from Nightmare in Dreamland
Community content is available under CC-BY-SA unless otherwise noted.
Advertisement