NiGHTS (sometimes written as Nights) is the main protagonist of SEGA's NiGHTS series. NiGHTS is a first-level Nightmaren created by the powerful wizard Wizeman to steal Ideya from the children whose dreams are acted out in Nightopia. As one of the two first-level Nightmaren that exist, NiGHTS is one of the most powerful beings to exist within Nightopia, believed only to be weaker than their creator, Wizeman. NiGHTS was originally designed by Naoto Ōhshima, who also created the original ("classic") designs for Sonic the Hedgehog and Dr. Eggman.

NiGHTS is a tall, skinny humanoid creature. Their face is beige and they have blue eyes, but these are the only two remarkable features that seem to be a part of their natural form, as the rest of their appearance seems to be covered in clothing. They have a purple headdress that resembles a jester's hat - while this looks to be separate from their head, it very well could be apart of their skull. NiGHTS wears a purple full-body suit that appears to be of a rubbery material. Over their torso NiGHTS wears a sleeveless pink vest with darker trim and golden embroidery and a golden cravat-like collar; they also appear to be wearing a white shirt underneath, as apparent by the material that covers their arms, and white gloves (though it is possible that NiGHTS simply has white hands). NiGHTS feet appear to be covered by the same purple suit that covers the rest of their body, but they have pink areas that mimic the appearance of boots, with yellow straps over them.

NiGHTS was designed to be a genderless character to allow both male and female players to identify with them easily. NiGHTS is often incorrectly referred to as both a male and female character, the latter more so due to being portrayed exclusively by women while the former due to in-game dialogue often referring to them as such.

With NiGHTS into Dreams... NiGHTS' personality and intentions are intentionally left up to the player's imagination; lead game designer Takashi Iizuka stated that NiGHTS is "a mirror of the child's personality". What is known about NiGHTS is that they harbour a powerful free spirit and a mischievous nature. NiGHTS is always shown to have a calm smile on their face, and their movements are slow and graceful, but also somewhat proud and showy, hinting that they have a certain bit of arrogance.

In NiGHTS: Journey of Dreams, NiGHTS' personality was expanded upon both in-game and via details left in the game's manual. Though their appearance still suggests that they are a calm individual, NiGHTS is shown to be easily-excitable and energetic. Continuing off Iizuka's statement that NiGHTS is supposed to represent a child's personality, the manual states that NiGHTS will not hesitate to scare or tease others, as they lack a sense of what is "right" and "wrong"; similarly, NiGHTS will often proudly reject the notion that they may be frightened, and will never hesitate to take up a challenge issued by the maturer Reala.

Throughout all of their appearances, it is shown that NiGHTS is not happy with the fact that they are a Nightmaren, and is shown to be displeased when referred to as such by Reala or others. NiGHTS wants to be able to make friends, and wishes not to be discriminated against by either Nightopian or human for their race or reason for their being. 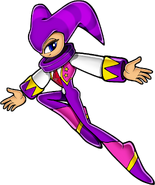 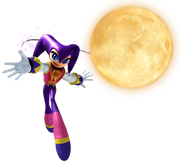