Start a Wiki
The Nexus (codename the Book of Revelations) is a 9th generation home entertainment system created by Revelation Heroes Entertainment, released on the 5th of April 2017. It is not intended to rival other systems so much as provide a cheaper, more user-friendly alternative in the already expensive console market.

Along with several games by RHE themselves and the usual third party releases, the Nexus will have several Nintendo releases, thanks to a partnership between the two companies. Similarly, it's online store will feature games from various other companies.

Though initially receiving some mixed reception due to it's lack of innovation, the Nexus eventually received acclaim due to it's accessibility and overall design, as well as a strong line of launch titles.

Any page with the category Nexus Games will be added here automatically. You do not require permission to create games for this console, but I reserve the right to remove any games. (Which will be reserved for Abandonware/Extremely low quality content)

The Nexus controller, better known as the Traveller, is a standard controller that comes in wireless and wired variants, though the console comes with a wired Traveller by default. The Traveller supports motion detection via a gyroscope and an accelerometer. It also vibrates. The Traveller is designed to be universally accepted by other consoles and PC's via USB ports. Though the Nexus itself doesn't utilise any such technology, the Traveller has a chip that can scan Amiibo's and similar technology.

A $25 converter will also be available for Xbox Controllers, V-Raptors and Dualshock controllers to make them compatible with the Nexus. 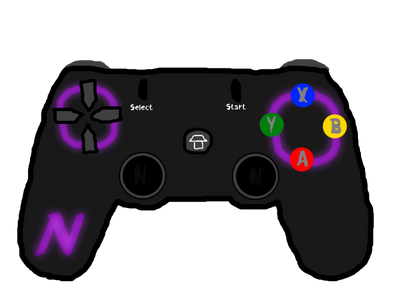 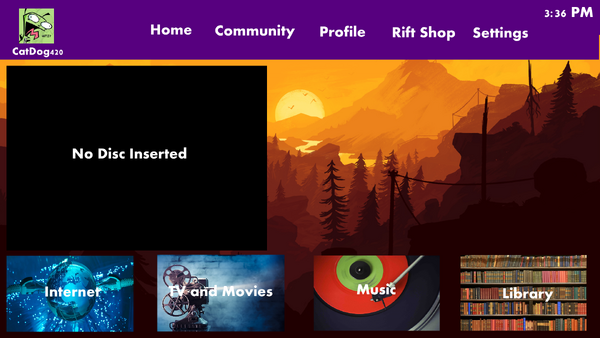 Like many other consoles, the Nexus allows you to browse the internet. Alongside basic functions, there is specialised function for social apps such as Instagram, Facebook and Twitter. Discord is also accessible through the internet section.

The Nexus will feature a free social service similar to Playstation Home, though RHE has assured the public that it will not feature it's spiritual predecessors many mistakes. The Nexus Hub is not available on launch.

The Nexus allows for achievements. In addition, playing games earns the player relevant trading cards. These cards can be combined to create a set, which unlocks additional content in the Nexus Hub as well as badges for their user profile, a la Steam.

On the Rift Shop, the user can buy various themes with different backgrounds and background music. The colour of the top bar is changed manually. Examples are below:

The Wall (Game of Thrones Theme)

Zombies (Zombie Chronicles Skin)
Add a photo to this gallery

From the community section, users may view the profile of others, access the Nexus Hub and use Nexus Groups. Nexus Groups are social groups where players can chat and share their interests. Each game on the Nexus has it's own official Nexus Group. RHE and Nexus news is also found on the Community tab.

The Rift Shop is an easy to use store where users may purchase games, movies, music, DLC and utility services. The Rift Shop is designed to be quick, easy and efficient, with simple navigation and quick searching.

Within the Rift Shop there is also the 'Time Machine', where users can buy older games from other consoles, thanks to the support of various other developers and publishers. A list of classic games can be found here. Please note that it is not a complete list of all the games available through Time Machine, only a list of popular games.

The Nexus Key is an addon for the Nexus that 'upgrades' the console completely. The Key is a small, USB like device that increases the speed, storage, and processing power of the Nexus. The Nexus Key is compatable with all Nexus games, but is not necessary to play anything, thought it is highly recommended for games which utilise CrowdS.

The Nexus launched on April 5, 2017 with an initial 8 titles. These launch titles were Dominant Rage, Bay of Thieves, Ruby Tuesday, Wastelander: The Demon Trials, Descendant: Old Guns, Stix: Revamped, and Legend of Zelda: Gauntlet of Fates.

At launch the console could be bought with a copy of Wastelander: The Demon Trials, Bay of Thieves or Ruby Tuesday (and one controller). The 1TB version retails for $250 AUD, while the 2TB version was sold at retail for $300 AUD.

There were also two special edition bundles, one for Stix: Revamped, and another for Loz: GoF, featuring special controllers and console colours.

There are a 1 Terabyte and 2 Terabyte version of the console available for purchase in multiple colours.

Starfield
Add a photo to this gallery

Jingles
Add a photo to this gallery

Galaxy
Add a photo to this gallery

A template for box art
Add a photo to this gallery

Retrieved from "https://fantendo.fandom.com/wiki/Nexus?oldid=3265021"
Community content is available under CC-BY-SA unless otherwise noted.