The Nextablet has ceased production. All Nextablet games you planned to make can be safely created for the Neo, retaining all touch-centric features. Details will be shown at the Fantendo Holiday Showcase.

The Nextablet is the second tablet handheld video game system by NextGen Solo. Taking cues from it's predecessor, the NextGen NinTablet, the Nextablet combines up-to-date technology with the familiar feel of the NinTablet.

To turn the system on, instead of having an on/off button at the front, the sqaure button on the back (identical to the one in the Nextablet logo) functions as the on/off button.

The 7" touchscreen display on the Nextablet (manufactured under the codename "Nextscreen") can function as several different things during gameplay. Most notably, there are no buttons on the Nextablet, just two circle pads, so the touchscreen and included stylus will be primarily used to cover the non-movement controls. However, the touchscreen has so much more interactive potential for games, especially combined with the gyroscope and accelerometer built into the Nextablet.

The display is also 3D-capable, so now added depth can be seen while playing. Since touchscreen interactivity is obviously on a flatter plane than a stereoscopic 3D game, any interactivity besides the allocation of button controls is best put in play when the 3D effect is subtle. Because of the large screen and available feature of moving the Nextablet, the optimal viewing angle (or "sweet spot") for 3D is much wider than what you would find on a 3DS.

The Nextablet has two 5 megapixel cameras places in a 3D-capable setup, allowing the taking of 3D pictures and video. Also, auto-flash is built in for low-light situations.

The Shift Online console client is the operating system of the Nextablet. This means it is much faster to access your games and add new ones through the Shift Market, due to the client not being a separate program loaded on the system.

Nextablet games' graphics quality are comparable to that of the latest 3D iPad titles, except that Nextablet disc offerings are full, console-like experiences. The Nextablet can also play Gamecube discs (and upgrade the quality to 720p), as well as all NinTablet discs. 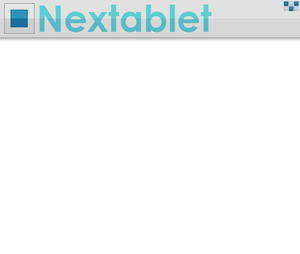 Boxart Template
Add a photo to this gallery 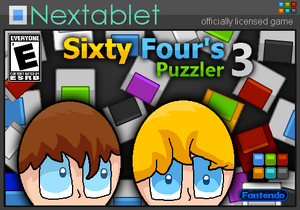 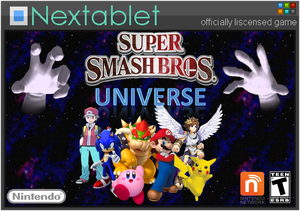 Super Smash Bros. Universe
Add a photo to this gallery

Nextablet Pro back side
Add a photo to this gallery

Retrieved from "https://fantendo.fandom.com/wiki/Nextablet?oldid=3265019"
Community content is available under CC-BY-SA unless otherwise noted.