The NextGen Bluevolt (more commonly called "Bluevolt") is the first home console gaming system created by NextGen Solo. It's control scheme is modeled after the Wii U, though with a much smaller and more egronomic frame. Also like the Wii U, it outputs full 1080p resolution graphics.

Besides being able to play its games, the Bluevolt can read standard DVDs and Blu-Ray discs with music, pictures, or a movie stored on it. The Bluevolt also has an App Store called the Voltage Market, where you can download free & priced apps, games, and movies.

Not only can the controller support a TV image on it, but it is also used for secondary menus and lists, much like GBA-to-Gamecube connectivity. Also, the SHiFT Online Store has special controller apps that you can launch from the console, which then displays a notification screen on the TV explaining that an app is running on the controller screen.

The Bluevolt can support up to four "Bluemotes" at a time. It also has full Wii backwards compatibility; the sensor bar on the console supports both Bluemotes and Wiimotes, but only four controllers at a time. Also, with the Bluevolt S and X, NextGen Solo's handheld tablet, the Nextablet, can be used as a controller. The system only supports one Nextablet at a time, so you must have 3 other "Bluemotes" to use 4-player.

Place logos in the gallery, linking to the games.

Kiyle DeeKay and the Sky Invaders

The Legend of Zelda: Shadow of the Triforce

Kenny's Kwest 2: The Xedel Return
Add a photo to this gallery 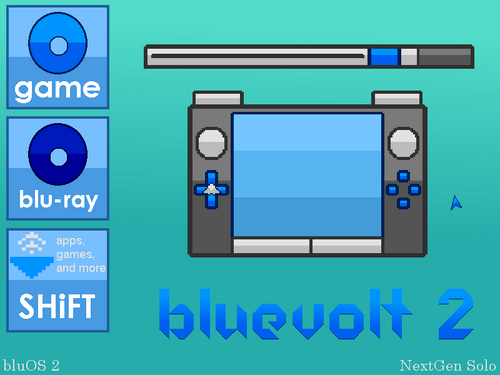 BluOS, also slurred into Bluos, is the new OS that is run on all updated Bluevolt systems. It's design is based heavily on the new OS for the NinTablet (SHiFT OS). A new feature to the Bluevolt that comes along with bluOS is the ability to connect onilne via NextGen Solo's SHiFT service, an online community hub and app store that debuted with the aforementioned new NinTablet OS.

The BluOS 2 Update: BluOS 2 (for Bluevolt 2 only) simplifies the previous BluOS design, combining the "Storage" and "Apps" icons into the SHiFT service icon, which now supplies 32 GB of free storage for downloaded games and game saves for disc-based titles, eliminating the need for a physical hard drive in the new Bluevolt 2.

Retrieved from "https://fantendo.fandom.com/wiki/NextGen_Bluevolt?oldid=2374426"
Community content is available under CC-BY-SA unless otherwise noted.