Yoshis as well as Baby Yoshis appear in Super Mario World U. In the game Yoshi comes in Green, Yellow, Cyan, and Pink, they all behave the same like in New Super Mario Bros. U. Baby Yoshis have their own unique powers and they can be taken along the adventure unless they are thrown or run into Lava, Poison Water or an abyss.

Enemies, as always, are trying to stop Mario from getting to Bowser's Castle.

References to other fantendo games

Mario in a world 1 level. 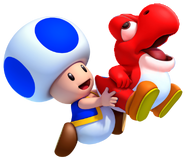 Poison Waterspout
Add a photo to this gallery

2-5: Lakitu Ruins
Add a photo to this gallery

Retrieved from "https://fantendo.fandom.com/wiki/New_Super_Mario_Bros._Food?oldid=2515561"
Community content is available under CC-BY-SA unless otherwise noted.