Mario and Luigi have been invited to a tea party with Peach and the Toads at the castle. After Peach and the Mario Bros. have met with each other in the castle and have settled in at Peach's royal dinner table, the roof of Peach's castle makes a terrible cracking sound, tears off the castle, and blows away. When the dust clears Luigi looks around. Peach has disappeared! Luigi looks up and sees Bowser and his son, Bowser Jr., fly away with the princess in Bowser's Clown Car. Luigi then runs to the other side of the long dinner table where Mario (who had fainted during the little earthquake that was caused when the castle's roof broke off) was lying. After Mario gets up, Luigi explains to him what has happened when he blacked out. When Luigi finishes, the two heroes run out of Peach's castle and set off for another to defeat Bowser and Bowser Jr. and rescue the kidnapped Princess Peach. 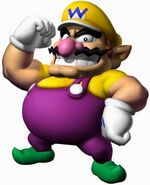 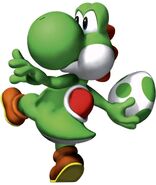 Yoshi
Add a photo to this gallery 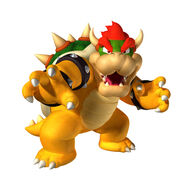 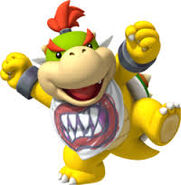 Toad
Add a photo to this gallery

Star Coins have appeared in every NSMB game, and now they return in New Super Mario Bros. 4. Each and every level in a World contain 3 Star Coins that are hidden in places you would never suspect. Mario & co. can use 5 of the Star Coins they find o open Toad Shops. Toad Shops sell power-ups and hint movies... and even have 30% off sales! (Sales are uncommon in the Shops, though.) Star Coins also open up cannons that take you to a World Mario & co. have never been to!

In NSMB 4, Mario, Luigi, Wario, and Waluigi do not jump through a red hoop to find the 8 Red Coins. Instead, Mario & co. collect these Coins which are scattered in 3 courses in every World. Once they collect 8 Red Coins in a course they either earn a power-up, a 1UP Mushroom, or a Coin Bag. (Coin Bags are filled with 15 Coins.) Red Coins are much easier to find than Star Coins are.

Retrieved from "https://fantendo.fandom.com/wiki/New_Super_Mario_Bros._4?oldid=2515562"
Community content is available under CC-BY-SA unless otherwise noted.