Peach is arriving back to the Mushroom Kingdom from her trip, Mario and Luigi and some others are all there ready to greet her when a strange Aircraft appears beside the airplane shes arriving in. Everyone looks surprised and Mario and Luigi attempt to get up to it with a Propeller Mushroom, but out pops Cackletta (reincarnated) and shocks them, sending them spiraling down back onto the ground. Cackletta steals Peach and yells, "This is payback!" Mario gets up and makes a mad grunting noise, Cackletta launches a giant Bob-omb off of the ship exploding and destroying part of Mushroom Kingdom, and leaving the town in peril. Mario and Luigi want to avenge the town and save Peach once again, but they both agree they will need help, so they ask there cousins Wario, and Waluigi, and they end up accepting after Mario bribes them with money, When they are all about to leave, Bowser comes in, scaring Wario and Waluigi off. Alongside Bowser are Bowser Jr. and Larry Koopa. He tells Mario he will provide them help, as long as he gets the princess once they save her. Mario and Luigi agree, feeling like any help is best, since now Wario and Walugi wont help.

There are many old and new enemies in NSM:TSOF, why dont you check out the Main Article, which has all the enemies, with pictures and full depth info. Main Article: New Super Mario Bros.: The Search of Fate/Enemy List

There are some worlds that can be downloaded, with new enemies (all enemies are on the enemies list.) and new fun these worlds are all free to download. Most dlc worlds only have one castle.

One of the new features in NSMB:TSOF, is the Battle Arena, you can choose any of your characters you have unlocked and go online, and battle people from around the world in diferent modes, you can even up your battle rank! you can earn coins to purchase power ups for your online or offline matches in the Arena, there are 10 Arena stages to choose from, and you can have up to 6 people playing at once! The arenas include:

Now about ranks, you can get up to rank 25. That is the highest rank possible. You gain experience every battle you win, if you loose, you only get a small amount of experience. Leveling up will unlock more items in the shop.

Instead of Star Coins as the currentcy the shop uses normal coins now. The shop owner, is Toadsworth. There is a shop in worlds 1-10. So there are none in worlds 11-15 and none in the 3 hidden or the 1 secret level. which is why, you can go back to the other worlds just for there shops whenever you feel like it.

Adventure mode is going through each world

-Coming soon, it will be a huge column with pictures, names and info. It will be awesome. 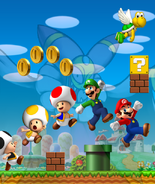