Fantendo - Game Ideas & More
Register
Don't have an account?
Sign In
Advertisement
in: Free to use Characters, What is the New Fantendoverse?, Heralds,
and 12 more

Hailing from a fourth dimensional universe, Nebuel Izunn Chadnezar is a Herald that likes to play pranks against various heroes from other panes of dimensions, paying particular attention to the self-titled New Fantendoverse due to it's similarities to his own dimension, except on the third dimensional scale. He demands to not be taken seriously, as he ran away from his own responsibilities in his dimension.

Nebuel is a pale brown Beorn with two differing fur end colors- his limbs have green fur tips at the end while his "coat" fur, "hair" fur, and his torso fur are brown. He wears a red bowtie and has yellow five-pointed star eyes. His head is shaped somewhat like an onion, something that is noted by his opponents fairly often enough for him to eventually get sick of it. He is able to unfold and fold his appearance across dimensional panes, allowing him to be paper thin in the second dimension, a line in the first dimension, and almost impossible to comprehend fully in the fourth dimension.

Nebuel is a "king" turned into a "fool", but of his own doing. Not willing to put up with the responsibilities placed upon him in his own dimension (of which he has always kept vague, just so that nobody bothers looking for him), he decided to become a joke just so nobody would take him seriously. As such, Nebuel is not only smarter than he actually seems, but well informed about the responsibilities heroes have- he just doesn't like them. He'd much rather play the role of a trickster than anything else.

Nebuel's role as a prankster is more direct compared to other Heralds, acting more villianous in his appearances than say, Zellen, who will act nice for what she wants or Quinn, who is genuinely nice with a bit of a kooky side. While not outright evil, Nebuel's pranks are often dangerous and present serious harm for those in the third dimension. However, Nebuel is extremely gullible and gives himself an open weakness which he tells all who are involved with his "games".

Nebuel Tzunn Chadnezzar appears as the main villain of Happy Birthday, Unten!, showing up to crash Unten's birthday party. Setting up his game's condition as needing to touch a clown for Unten to win, Nebuel summons his friends (U-Rex, Mr. Saqure, and Chrysler) to invade the park, requiring Unten to think fast to try and stop him. While waiting for Nycho Invalidez to get back, Unten battles him and the rest of Demented Dimension. After Nycho returns, Unten uses the gluten free ingredients Nycho shopped for to change into a clown get-up, managing to win Nebuel's game, in which he swears "I'll be back in 90 days or your money back!" as he and the rest of Demented Dimension glitch out of the universe.

Nebuel Tzunn Chadnezzar has the standard abilities of a Herald, which is to create portals and being able to create dimensions with the Stenographer Stones. Nebuel is not interested in creating dimensions, but rather playing pranks on what he considers to be inferior dimensions to his, so he winds up using his portal powers as a means to travel. As opposed to using his portals heavily in combat, Nebuel's fourth dimensional powers allow him to fold and unfold objects in and out, slipping into spaces that cannot be perceived by the third dimension or summoning unseen objects from the fourth dimension into the third or second. His powers are mistakenly seen as reality warping, where as it's more akin to being able to move a third dimensional object across the Z axis in the second dimension, which only has the X and Y axises. This fourth axis, which Nebeul calls the W axis, allows him do a variety of things and is not a power that can be taken away, as it is knowledge that Nebuel is able to comprehend as opposed to anything else.

Nebuel operates under his own set of rules for his powers, seemingly setting limitations for himself for the hell of it. He always operates under a new weakness whenever he appears- this can be as simple as making him say his name backwards or having him touch a clown. In Happy Birthday, Unten!, it appears that when someone wins one of his games, he will swear to return in 90 days. 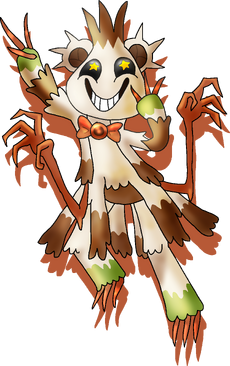 Hyper Form Nebuel was the full name of Nebuel Tzunn Chadnezzar's Hyper Mode form. While it has yet to appear in canon currently, it could be used by Nebuel to increase the extent of his powers as well as alter his ability to interact with the fourth wall, which he considers to be the only aspect of the fourth dimension he hasn't been able to do much with in his normal form. While all conditions for his fights continue to be the same in this form, he has been shown to alter the rules if he uses this form.

Taking on a more monstrous and demented appearance, Hyper Form Nebuel has more exaggerated expressions compared to his original form. His ears become spiked similar to other Beorns in Hyper Form and he gains thicker legs and a "jacket" of his own fur, as well as his fur becoming more split across his belly. Two giant arms emerge from his sides that act as another pair of limbs and he gains claws on his hands and feet. A Hyper Mode orb appears in the center of his bowtie. Nebuel also becomes more maniacal in this form, often shouting strange things at his foes as he attacks them.

Nebuel's powerset becomes expanded in this form to transform space around him to one of his dimensions kept in his Tesseract Dice and allowing him to interact with the fourth wall, able to travel from scene to scene through the "page lines" that separate them. This allows him a limited form of time travel that is only limited to the story he is in. He cannot execute this in games as they don't exist, but can interact with hud elements. Due to his already great power, Nebuel's increased power from the Hyper Mode orb mostly consists of these two improvements. Similar to his original powerset, it is possible to banish Nebuel once you complete the objective of his game for the day. 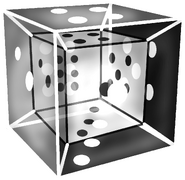