Start a Wiki
Nazo is the mysterious silver hedgehog who was first seen in the original pilot of Sonic X[1]. He was intended to play a larger role in Sonic X season 4, but it is unkown if that will actually happen. The word "nazo" means "mystery" in japanese. Thanks to Chakra-X, Nazo has become a popular figure in Sonic fan works, most notably as the main antagonist of the flash movie Sonic: Nazo Unleashed.

Nazo, like the other three hedgehogs, is able to use Chaos Control, he is able to fly and obliterates his enemies with his Chaos Torrent.

In the Lapisverse, it is suggested that Nazo has more powers, like Light Blasts and the ability to make people believe he doesn't exist.

Appearances in Other Media

Nazo first made his debut as the eponymous main antagonist in the promo flash animation by ChakraX The Power of Nazo, and the remake, Nazo Unleashed. In Nazo Unleashed, Nazo was a sentient being formed by intense excess negative energy emanating from the Chaos Emeralds, manifesting in the form of a crystal colored hedgehog. Born a cruel, vain, and destructive menace, Nazo set out to obtain the Chaos Emeralds. He first appeared before Knuckles and used Chaos Control to teleport away with the Master Emerald, causing Angel Island to fall to the Earth. He later stole a Chaos Emerald from a jewelry store in Southopolis, before gleefully firing a blast of energy and obliterating the city block out of sheer sadistic spite. Upon hearing of the disaster, Tails and Knuckles sought out Sonic to inform him of Nazo's deeds and help stop him. Locating all the stolen Chaos Emeralds and the Master Emerald in a desert, Nazo appeared before them. Eager to fight him, Knuckles burrowed underground and shot out, uppercutting him, only for Nazo to unflinchingly heal. Charging himself up with Maximum Heat technique, Knuckles rushed him, but was coldly backhanded by Nazo into a cliffside. Nazo then engaged Sonic, shooting energy blasts at him, which Sonic cockily dodged with his speed.

Nazo makes an appearance in Sonic Heroes 2 as part of Team Covert, a group of glitches incensed by their being shunned led by Covert.

Nazo was originally found in space, although what he was doing in there is unknown. It wasn't until Tabuu's defeat in Super Smash Brothers Brawl that he was found by Tabuu and was raised into the remains of subspace, where he found out he was one of the most powerful beings in the universe. He is able to use both light and dark of the chaos emeralds for his own advantages, making him transform into True Nazo.

Later, he traveled back in time to aid Hilter. However, due to a mistranslation, Hilter named his force Nazis. Nazo then gave up on trying to assist Hilter, and began doubting whether he really was evil. After returning to the future to assist Tabuu, he faced off a group of people and was promptly defeated. However, it caused his memory to jog back on why he was in space in the first place, which was to stop the creation of a Doomsday machine that would have accelerated the logic paradox in the Lapisverse, causing it to explode from the overlapping of universes. He returns to Subspace to help the heroes out and goes against is own master. When the true mastermind behind it all reveals himself, he is one of the playable characters that can fight against him.

Kirby Lover7485 and the Pokemon World

Nazo makes his main villain appearance in this game. He and Darkrai is the last boss.

Nazo is a being of negative enegry created from the Chaos Emeralds.

Nazo in his perfect form. 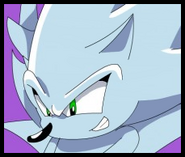 Retrieved from "https://fantendo.fandom.com/wiki/Nazo?oldid=2861578"
Community content is available under CC-BY-SA unless otherwise noted.