Naomi is a young woman from the RTAverse. She is the most recent family member in a long line of superhumans who have worked as vigilantes in the past, but now her powers, demonic roots and blind rage have consumed her to the point where she has become the RTAverse's biggest threat. Naomi is the founder of the RTAverse version of F.A.N.T, and she started the organisation up to help other superhumans as well as protecting the world from especially dangerous superhumans or supernatural creatures, although she was forced out in late 2019 due to her crumbling mental state.

Naomi is a 19-year-old Latina woman with long, green, wavy hair and light blue eyes. When she was looking to help people besides herself, Naomi wore a black and purple cap on her head. Naomi wears a black leather jacket with a black T-shirt underneath, black leather gloves, black leather pants and black combat boots. Naomi also has a silver necklace. As of Now For Something Completely Different, Naomi's hair is now blue. As of the timeskip in The Spiral, Naomi's hair is now red and her irises have turned red.

Since taking control over demonic forces, Naomi's outfit has changed somewhat, with her now wearing a long black trench coat and black knee-high boots, although she still wears the same pants from her days as a hero. One of her arms has an eternal flame burning and her tench coat is outlined by smouldering magma.

Naomi has pyrokinetic and psychic powers. Her pyrokinesis is rather strong and initially they could reach 200 degrees Celsius, but as she's embraced her demonic side her pyrokinesis can now reach temperatures of 1,500 degrees Celsius. Her psychic powers allow her to see the future, communicate telepathically and take control over other people. Naomi's psychic powers also enable her to shoot pulses that can cause some damage. Her psychic powers were inherited from her mother Samantha, whose mother had psychic powers before her and so on and so on. Naomi inherited her pyrokinetic powers from her father, an incredibly high-ranking demon in the forces of Hell. In more recent times, Naomi has gained the ability to summon swarms of demons at will after overthrowing most of Hell's high-ranking forces, like her father. She has used her new-found position of power in Hell to attack people who she feels have wronged her in the past in order to soften them up so she can deal the final blow.

Naomi can also set herself alight with her pyrokinesis, but doing this can fatigue her rather quickly and can sometimes injure Naomi. When Naomi gets especially angry, her pyrokinesis gets especially strong and the temperatures of her flames can triple. She is also able to breathe fire when she is especially angry, and her eyes usually go completely red. Naomi wasn't all that fond of her superhuman abilities at first as they usually got the best of her whenever she got in a bad mood, which resulted in her injuries, and she hated the visions she received from her psychic powers. However, as Naomi's become more ruthless and psychotic, she has learned to love her powers and embraces how powerful she has become in more recent times.

Around the time of the first season of Side Stories, Naomi was rather docile and calm when nothing was really going on. She tended to sit in her office and relax when she was calm.

However, Naomi had a tendency to go into a blind rage if something goes wrong. She had anger issues that result in her not watching what she was doing, and potentially hurting others, including herself. Naomi especially erupted in anger whenever her mother was in any danger or put through emotional trauma. She was fully aware of her mother's PTSD and always tried to help her whenever she could because of this. Naomi usually regretted her actions after her rage subsided unless she felt what she did needed to happen. Naomi was usually frustrated with how other organisations manage supernatural problems and has snapped at the CIA's director once before.

The actions of Marie Warner resulted in Naomi being in a state of major mental instability, and as a result she became very violent in how she deals with things. Her dislike for Marie was very intense and she let her get under her skin far too often. Naomi's outbursts were much more common and much more dangerous as a result. The events of the first season of Side Stories left Naomi rather bitter and angry with most of the world, and it worsened her anger issues.

As of season 3 of Side Stories, Naomi's rage has completely consumed her and she has become a complete psychopath. She is completely remorseless of all of her actions and is only interested in what benefits her and her only. She has a very strong tendency to lash out and attack anybody who even slightly disagrees with her. Being kicked out of F.A.N.T. resulted in Naomi completely snapping and being prepared to go against everybody who gets in her way. The death of Mr. D'Angelo fueled the idea to Naomi that she was completely unstoppable and has led to her becoming more and more unstable than she was before, becoming completely ruthless and having an incredibly low regard for anyone's life but her own. 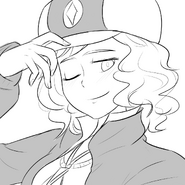 Naomi, as drawn by Exotoro

An sketch of Naomi in her more evil version, drawn by Exotoro
Add a photo to this gallery

Retrieved from "https://fantendo.fandom.com/wiki/Naomi_Richards?oldid=3248449"
Community content is available under CC-BY-SA unless otherwise noted.