Nabbit is an enemy who first debuted in New Super Mario Bros. U, where he would steal items from Toad Houses. This characteristic is usually carried between games, however sometimes Nabbit will help Luigi and Toad save Princess Peach like in New Super Luigi U.

Nabbit's name is a play on words of "nab it", one of his main characteristics, and rabbit for which he looks like. It may also be a pun on the phrase "dag nabbit!", which a person might say after the sorts of actions he performs. He also wears a handkerchief over his mouth which resembles Bowser Jr.'s handkerchief he wears in numerous games.

Nabbit is a purple rabbit with round eyes, long ears, and black limbs. He also wears a white handkerchief with a drawing of a large mouth with sharpened teeth, similar to Bowser Jr.'s mask, as well as orange shoes and white gloves.

In New Super Mario Bros. U, Nabbit appears as a thief who steals from Toad Houses. He will appear in one level for each world (except for Peach's Castle and Superstar Road). When the player enters a level with Nabbit in it, they must catch Nabbit before time runs out.

In New Super Luigi U, Nabbit joins up with Luigi, Blue Toad, and Yellow Toad to save Princess Peach. He has the same jump and flutter as Luigi and is invincible to all enemy attacks. However, Nabbit can still lose a life by falling in pits, lava, poisoned water, or getting crushed. All power-ups he collects are released as 1-Ups at the end of the level.

Nabbit is a DLC downloadable character from the Flower Pack.

It has been stated that Nabbit will appear in Mario Party 10 and give Bowser extra dice block in Bowser Party.

Nabbit appears in the Mushroom Kingdom U stage. Although what he does is currently unknown, it has been implied that he will catch fighters in his bag.

Nabbits are confirmed to appear as enemies in the game. A king, King Nabbit, is the game's main antagonist.

Nabbit appears as an enemy in Lets-a-go, Mario.

In the game, Gregory Toadlor was a scientist at E Gadd Industries. He was testing a new chemical on rabbits when his assistant, Trevor Koopsley, set the radioactive rabbits free, who started to bite him. Later, it is revealed he was turned into a purple rabbit-like creature with great athletic speed. He stole shoes, gloves, and a bandanna belonging to Bowser Jr, and dubbed himself "The Nabbit." At another time, Trevor was relaxing after "destroying" his friend in his house when Nabbit broke in and injected a serum into him, making him slowly turn into a purple furry creature.

Soon, Trevor and Nabbit were on the run in the Mushroom Kingdom when Mario, Luigi, Blue Toad, and Yellow Toad appeared and fought them. Trevor completed his transformation and became a buffed-up purple monster known as, "The Urchin."

Nabbit appears as an unlockable playable character in Mario Party 10. His unlock requirements are to be announced.

Nabbit appears in Mario Super Party as an ally.

Nabbits appear as enemies in this massively multiplayer platform RPG.

Nabbit appears as a playable character in Super Mario Bros: A Greater Evil. His stats are:

Also, some Nabbits appear in village or town levels, notably in Nabbit Village.

Nabbit appears as a playable character in Super Mario Party 10.

Nabbit makes a brief appearance in the main story of Mario & Luigi: Sage Quest. Nabbit can be found in Moonshade Kingdom, inside of Eclipsa Castle's basement, holding the key to the chest containing Neith and his guards. Before encountering him, Callisto mentions him stealing one of his keys, said key being the open that opens the chest. Once Mario and Luigi find him, and he runs away, but he leaves behind the chest key.

Nabbit appears as a unlockable racer in Mario Kart: V² Circuit. Like the rest of the characters, he can be unlocked randomly by placing first in a Grand Prix on any engine class. Alternatively, he can be purchased at the shop by collecting Coins. He is a lightweight with a small size. He has above great speed, good acceleration, poor handling and below average traction. 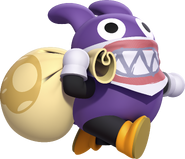 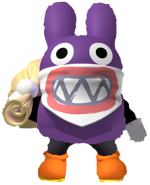 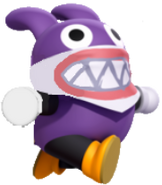 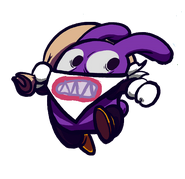 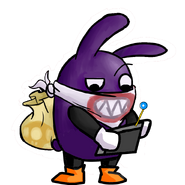 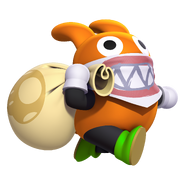 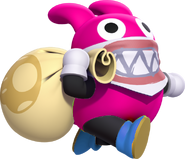 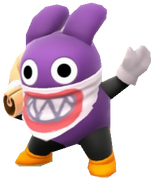 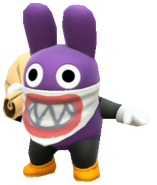 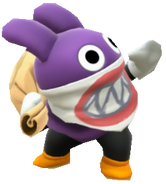 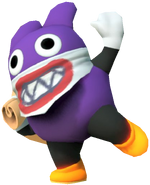