NES Mario (also known as Retro Mario, 8-Bit Mario or Pixel Mario) is a pixellated NES version of the famous video game character, Mario. Usually, his appearance is based off of the original Super Mario Bros. game from 1985, but his variations from other titles may be used as well.

It is unknown how exactly he retains his blocky appearance in the games he appears in, but some say he comes from an alternate dimension where everything is pixellated like him.

NES Mario is the star of all the classic Mario games and the fanon games that star him in it. NES Mario is referred to as Classic Mario. There is also an Amiibo based off of him. The Amiibo will unlock secret levels and power ups/enemies from future Mario games for the original Super Mario Bros. for the NES.

NES Mario appears as a supporting character who hosts the minigame, Mario Quartz Bros., which features 2D, Super Mario Bros.-style levels in which Mario can earn extra Power Moons in every kingdom.

Retro Mario makes an appearance in Mario Kart Dimensions, as an unlockable character. Retro Mario is one of the most challenging people to unlock, as one must win Special Cup and Lightning Cup on Mirror Mode, or play 15000 races. He is classified as a "Small" driver.

NES Mario appears in Mario Kart Ultra, along with NES Luigi, as an unlockable character. He is a Light weight driver. He has an alternate costume, where you can race in his "Super" form.

NES Mario joins Modern Mario and the 2nd Dimension Luigi and Tails (along with NES Luigi) on their mission to defeat Mandy and foil her plan for universal domination.

NES Mario is confirmed to appear in Sable and Mabel: Dream Team but he will make a small cameo in a holographic billboard and he uses his sprite from Super Mario Bros. 2. 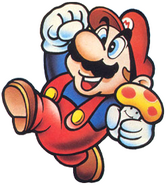 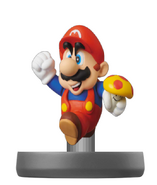 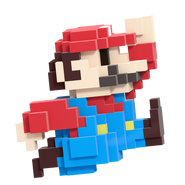 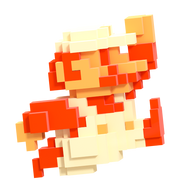 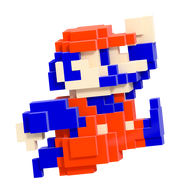 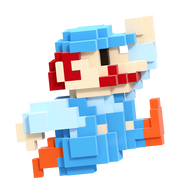 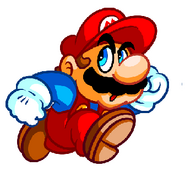