Fantendo - Game Ideas & More
Register
Don't have an account?
Sign In
Advertisement
in: Sysop Approved, Ink's Stuff, Free to use Characters,
and 29 more

“Alright, then, fiend! Are you ready to have your diabolical plan foiled by the greatest (and last) Beorn in the galaxy? ... That's what I thought!!”
— Mynis, before losing miserably in a fight against a villain

Mynis is a Zeonian Beorn trying (and usually failing) to be a hero. He once fought against the oppression of a tyrant from space and somehow managed to save his planet's population (but not the planet itself) from destruction. He now lives on Earth, sleeping on a couch in the Toronto apartment of a clever young woman and her beanpole lizard girlfriend, stumbling his way through heroic quests, and making money off of merchandising as he strives to become worthy of calling himself a hero.

He is Omega Prime's version of Unten Bluzen.

Mynis, being a Beorn, looks quite similar to a bear, and has the usual black eyes with white star-like pupils and hands comparable to paws. His fur is a dark bronze color, which he keeps as well-groomed as possible in order to retain a positive image. This grooming used to include braiding some of the longer hairs and decorating them with small metal coins and flintstones, but he dropped this habit shortly after arriving on Earth. He is actually fairly tall for a Beorn.

Like Unten, he tends towards scarves as far as clothing goes, but his favorite scarf - a red one, with his name embroidered into the fabric - is much longer than any scarf Unten has ever worn. Though this scarf looks awesome when combined with a good wind and a heroic pose, Mynis frequently trips over it when actually fighting. He also has a strange obsession with belts, and claims that they emphasize his tragic backstory. He wears nearly two dozen belts on his entire body, including on his forearms, hands, calves, waist, chest, and even one on his face as a makeshift eyepatch. (He has both his eyes, though. He just thinks it looks cool.) He is also often seen carrying an over-shoulder bag, in which he stores first-aid supplies and a collection of high-quality Blumps, which he grows himself.

Mynis has some serious inferiority issues. As a prophetic hero who fulfilled his mission, he had to live up to the stereotype of being an incredible hero despite being nearly as incompetent in battle as the main timeline's Mondo. He tries to convince himself that he's a badass by dressing the part, with a collection of belts that would make any edgy giant-sword-wielding antihero jealous and a cocky nature that hides how scared he truly is. Eventually, being a self-certain dick to hide his vulnerability became second nature to him. Though he tries to tone down during his journeying across the multiverse, he ultimately finds himself turning back towards it when facing any enemy at all. He even tries to put on a brave façade while around other Beorns in an attempt to show that he handled the extinction of the species as well as they did. He is awful at making the difficult decisions that are expected of heroes, and will suffer from a nervous breakdowns if the stakes are too high. Despite his self-spawned reputation as a warrior without match, he hates it when he's forced to fight, but sometimes finds comfort in playing support roles in others' fights, and is always willing to spar when the stakes don't involve lives or the fate of the world. After seeing so many other heroes hard at work during the events of Days of Victory, he built up enough determination to start working out and training with extreme regularity, with his hope being that he will someday get strong enough to be actually worthy of calling himself a hero.

While alone, Mynis finds distraction and satisfaction at cultivating the mysterious Blump fruits, at which he is thought to be the best in the multiverse. For him, it's a legitimate source of pride, and one of the few areas of expertise in which he acts humbly and honestly when praised. He also enjoys cooking, which he is slightly less skilled at but still capable enough to cook a good meal. He is an astonishingly impressive haggler and negotiator, though he usually just uses this talent to figure out royalties and licensing deals for his merch, so he tends to get a bit nervous when he has to use it to save lives. More recently, he's taken up drinking out of memory of Mioda, and displays a remarkable tolerance for alcohol. He is acrophobic, illiterate, a fan of sports, and enjoys fresh air.

Like Unten, Mynis possesses low-level electrokinesis which can be enhanced through use of Blumps, and he also frequently wields bladed weaponry, but the similarities in their fighting styles end there. Mynis’ range of electrical manipulation is inferior to his counterpart's, and he has a bad habit of tripping over his scarf when he attempts melee combat with his weapons of choice, a pair of daggers he jealously/zealously named Impeerion. Fortunately, his areas of expertise lie very clearly in other areas. He is relatively skilled at first aid, and his collection of belts can be used to treat wounds in emergencies by bandaging them or temporarily slowing the flow of blood to them. His knack for talking can be quite useful for both cheering allies on and flustering enemies with a wide array of taunts and insults. His greatest asset is his skill at growing Blumps. With the power granted to him by eating his higher-quality fruits, he can usually exceed a Blump-boosted Unten in electrical manipulation despite their initial power difference.

Sometime after Fantendo Smash Bros. Victory, Mynis begins attaching his daggers to the ends of two belts, allowing him to alternate between wielding them like traditional knives and swinging them about like morning stars. The unlikely benefits of this decision, including a massive boost in attack range and a decrease in his predictability, make him more threatening in close-quarters combat than he was before. It also gives him more things to get tangled in or trip on, though.

Consuming a Glistening or Golden Blump allows Mynis to transform into Narcissus Mynis. As with Unten's Midas form, this form grants him increased power and speed, as well as increased electricity manipulation abilities. Rather than the toxic Midas Gold, however, his body transforms into Narcissus Silver, which is not only arguably more beautiful-looking but also completely resistant to energy. As a result, attacks bounce harmlessly off of his polished fur until the form's powers wear off. It is a significantly more defensive form than most other Glistening Blump transformations, but it's no less useful.

Since Mynis usually uses his higher-quality home-gardened Blumps to achieve this transformation, its improvements are more noticeable than that of Midas Unten's, but the time limit on it is about the same.

This form is Mynis's main alternate form, and generally appears more often than any of his others.

Using a Hyper Orb allows Mynis to transform into his Hyper Mode, which he nicknames Icarus Mynis for the sake of maintaining a consistent theme between all the names of his "super forms." In Hyper Mode, Mynis' entire body becomes supercharged with electricity, increasing his attack power a bit and giving him the ability to move at incredible speeds in short bursts. He also no longer needs to recharge his powers on a regular basis, and can unleash a limitless amount of electricity. For some reason, Mynis' Inpeerion knives mysteriously vanish in this form, meaning he is forced to fight exclusively at close-range using his electricity-bathed claws, but he is usually able to close this distance with his Hyper Mode's speed just fine. However, Mynis is still just as prone to tripping over himself or missing with his attacks thanks to an even longer scarf.

This form has yet to make a canon appearance, since Mynis doesn't currently have a Hyper Orb he can use.

Like others, overuse of his Hyper Mode may cause Mynis to take on a Nega Mode form. This form is just as fast as his Hyper Mode, but lacks the boost in attack power and completely nullifies his electric abilities. Worst of all, his belts and scarf completely vanish while in this form, leaving him looking almost identical to Nega Form Unten.

This form has yet to make a canon appearance, since Mynis doesn't currently have a Hyper Orb he can use.

Though Mynis never appears in any of the games in the Prodigy series, his nature as an alternate Unten means that he has experienced the same events that Unten experienced during his adventures, albeit with some very obvious differences, such as him being accidentally responsible for Queen Pixella's death during her kidnapping. However, with the help of many others, he makes it through these adventures despite the odds stacked against him, albeit at the cost of his planet...

Mynis appears as a playable character, and was announced during the 3/5/16 "Witching Hour" event. Later, he was joined in the roster by Ronnie and Claire. This is Mynis' first official appearance in any Fantendoverse content. During the events of Days of Victory, he, Ronnie, and Claire are recruited by Unten and company to help battle The Threat.

Mynis returns to the New Fantendoverse to participate in the World Tournament, but is defeated (and thoroughly humiliated) by Spree early on in the tournament, and is eliminated in the first Redemption Free-For-All by stomach cramps Silver Zin and Noora Natsumi.

Mynis is one of eight fighters in COLD❄BLOOD's FANTENDOVERSE expansion. He is a middleweight fighter with a hefty amount of health and defense, but somewhat poor attack and the most powerful appetite in the whole roster. His moveset is characterized by mid-range standard attacks, specials that can be used to destroy oncoming projectiles or even ignore Parry, and a looot of sweetspots. His signature mechanic is Blump Garden, which lets him grow Blumps mid-fight to bolster his performance and reliably refill his rapidly-depleting Hunger gauge.

Sometime after the World Tournament, Mynis is briefly recruited by Silver and Zellen in their war against Mallory Zin. He makes a brief cameo close to the end of the story alongside most of the other characters from the FANTENDOVERSE expansion.

If you wanna know what Mynis thinks of another character, feel free to leave a link to that character's page right here! 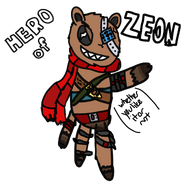 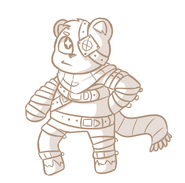 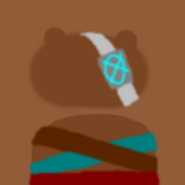 A Mynis variant of the Matchtendo default avatar 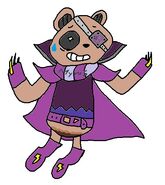 The artwork on Mynis' Face Off! card. Drawn by LegendaryHero1023 (t∣b∣c)

The front side of Mynis' Face Off! card. Drawn by LegendaryHero1023 (t∣b∣c)

The back side of Mynis' Face Off! card. Drawn by LegendaryHero1023 (t∣b∣c)