Mylan is once a little princess and now the queen of the Skies of Wonder. She was very kind hearted girl who have the power of the star spirits and her full name is Mylan Starlight. Her true love is Prince Cosmo, and eventually married him and have a daughter named Maria. Like Rosalina, Not much about her and her past, since she met with Princess Peach and her friends. She is portrayed as being sisters and friend with Karina (Well, they're actual sisters actually), rather than enemy like one time that Karina is possessed by Skouro.

Cosmo is her Husband, and she love him dearly. She meet him when she was younger. She grow up with the help of the Pandora Cube, and she married Cosmo. They have a daugther named Maria, and they're now both king and queen of the Skies of Wonder.

Maria Starlight is her little daughter, and she also love her dearly. She was a begginer adventurer, and Mylan trains magic to her. She loves to play, make puzzles, and etc.

She is her older sister. She and Mylan parted when Karina is 20 while Mylan is 12. Sadly, Skouro appears and trapped and controls Karina. Mylan Saw her and hardly realizes her. And thus, that's begins the story of Smash Sisters Unite!. After Skouro is defeated and Karina turns back to normal. She was friendly with Mylan and her family, and get to live in The Skies of Wonder

She, along with Princess Peach, is the main heroine of the game, and is going to be hunted by Karina and her minions, and eventually turn her back to normal. Afterwards, She got grow up thanks to the Pandora Cube and marry Cosmo.

It was confrimed that She returned in adult form and still become the main heroine. After freeing Karina from the spell(or at this case, from Skouro), She will had to face various new threats to save her daughter, Maria Starlight, and save her kingdom. At the first half, she joins Peach and the gang(as the leader) to stop Ganondorf's plans to kidnapped Mario by defeating his minions. At the second half, Peach had send a war against Ganondorf's army, and Mylan and the girls had to save her in the war and stop Ganondorf. At the three half, It turns out that Ganondorf is working for evil empress Galaxias, and now Mylan, Peach, and the gang will had to save the world from them once again.

Her backstory remains the same, but the rest of the story of the manga sightly altered. She was after the brainwashed Karina, and prevent her from Attempting to torture Prince Cosmo. She was Mostly really caring(especially to her boyfriends, friends and family), and sometime loudmonth(mostly to bad guys of course), and have more powerful magic power in her child form. When she's adult in the future issues, her personalty sighty changes. She is even more caring and sometimes more serious than her daughter.

Just like the manga, Her backstory remains the same, but the rest of the story of the show sightly altered. She trying to save the world from Karina(Possessed) and prevent her from Attempting to torture Prince Cosmo by any means possible. She was Mostly really caring(especially to her boyfriends, friends and family), and sometime loud-month(mostly to bad guys of course), and have more powerful magic power in her child form, especially in her adult form. When she's adult in season 2 or later seasons, her personalty sightly changes. She is even more caring and sometimes more serious than her daughter. 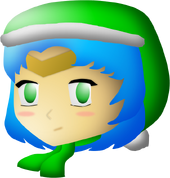 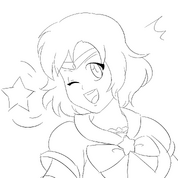 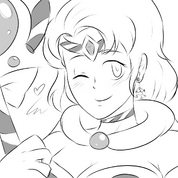 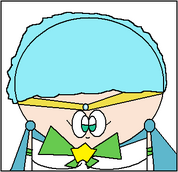