Mushroom War is a 2D platformer massively-multiplayer online action RPG set in the Mario Bros. universe. It was produced by Lunatic Entertainment and published by Nintendo for the Wii U, 3DS, 2DS, and PC, the latter of which it could be purchased through Steam or both the companies' respective websites.

The numerous battles with Bowser have, over time, opened up avenues for other villainous adversaries to begin their march on the world. As time went on, the nations found themselves constantly vying for control either through defense or offense, and this would ultimately devolve into a full-on world war. This war would become known as the Mushroom War. Soon, formerly allied provinces began to break apart until several major kingdoms were all fighting each other for supremacy.

As a citizen of one of these kingdoms, it is your duty to join the ranks of their militia and fight to claim the world as your own, or keep what territory you have!

Each of the playable kingdoms have two races for a player to choose from.

The Mushroom Kingdom is the largest kingdom on the planet, ruled by Princess Peach Toadstool, and the realm that most kingdoms find themselves fighting to obtain. The only thing that has kept the Mushroom Kingdom from being overtaken are the efforts of the Mario Bros, Mario and Luigi, but the sheer size of their foes is beginning to become more than the Bros. themselves can handle on their own. Your main mission as a Mushroomian is to stop the Dark Kingdom from ruling the land, but also must stop the other kingdoms from taking over, as well.

Considered by many to be the most dangerous of the kingdoms, the Dark Kingdom is ruled by King Bowser Koopa. It has nine provinces, which are ruled by the rightful heir to the Koopa throne, Bowser, Jr., and the others are ruled by the Koopalings. Like other evil kingdoms, their main goal is to take over the Mushroom Kingdom, although players can find themselves underhandedly working for the Koopalings as they vie between themselves for control of their own kingdom.

It does not have its own currency, but uses the various currencies of the other kingdoms, encouraging its citizens to rob and pillage the other lands.

A large kingdom neighboring the Mushroom Kingdom, they are considered extremely wealthy but are politically less influential. This has been a boon for them as other kingdoms are not quite as interested in annexing Beanbean until Mushroom has fallen.

The Beanbean Kingdom's currency is known as a Bean Coin, and 10 are worth 100 of the Mushroom Kingdom's; this indicates that they are far richer than the neighboring kingdom. While it is stated that the exchange rate constantly changes, for the sake of gameplay it remains at this.

Subcon is in the largest state of flux, and is now torn between the Dream Province, ruled by King Osama and the Nightmare Province, ruled by King Wart. Not technically of this world, Subcon is found in the subconscious mind, and is a dream realm. To access it, other players must rest in an inn or find another way to fall asleep. Those adventurers who reach Subcon are known as "Somnambulists", and are viewed with an air of mysticism, fear, or disdain. 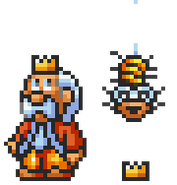 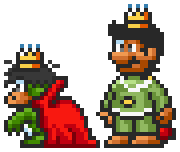 King of Big Island
Add a photo to this gallery

Like most of Bowser's old castles, his Sky Castle had fallen into ruins after his defeat forced him to abandon it. Like the Neo Bowser Castle, it crashed into the ground, leading to serious damage to its structure. However, with the world war expanding, Bowser has allowed his old castles to be retaken by his children, and Bowser's Sky Castle has come under the leadership of Bowser Jr. Unlike the Koopalings who have been since disowned, Bowser still cares greatly for his favorite son and took the time to refit the structure, repairing its damage and improving its capabilities.

Crocodile Isle is a dark and gloomy area neighboring Donkey Kong Island infested with brambled swamps, volcanoes and green gassy fumes that pollute the area. Many ships have crashed into its banks for years due to the island's periodic submerging and rising again. During periods of its submergence, the Kremlings resort to using K. Rool's Mobile Island Fortress.

Neo Bowser Castle had fallen into ruins after Bowser's defeat in the Pi'illo Kingdom, but with the world war expanding, Bowser has allowed his old castles to be retaken by the Koopalings, whom he has disowned but is allowing to continue to work under him to try and prove their worth. Neo Bowser Castle has been refloated and is now inhabited by Morton Koopa Jr.

Yoshi (Red)
Add a photo to this gallery

Flamethrowing Buzzy
Add a photo to this gallery
Retrieved from "https://fantendo.fandom.com/wiki/Mushroom_War?oldid=2895538"
Community content is available under CC-BY-SA unless otherwise noted.