Mushroom Goombas are enhanced versions of Super Goombas, which are towering, super-sized Goombas. They are notably incredibly tough, and are probably the strongest Goomba variant to ever have existed. They are created when a Goomba takes a Big Mushroom and turns into a Super Goomba, and then takes a regular Mushroom. Incredibly rare due to the unlikely circumstances in which they will exist in, Mushroom Goombas take ten stomps or fifty fireballs to kill. Defeating the mushroom behemoth will have it drop three mushrooms for Mario to use.

Mushroom Goombas are similar to size to Super Goombas, which are roughly 4x the size of a regular Goomba. They have two Mushrooms sticking out of their head and have a red and white color scheme with the trademark Mushroom polka dots appearing around their head.

Mushroom Goombas are incredibly strong, even more strong than some bosses that have appeared through out the Mario series given their huge health amount. They take a total of ten stomps to kill or fifty fireballs to defeat. They can also destroy blocks like Super Goombas. They can also additionally have other enemies stacked on top of them. Like regular Goombas, they are able to walk on ice without slipping or sliding.

Mushroom Goombas make their debut as a secret enemy in one of the game's updates. They can be formed in either the editor (by giving a Goomba a Big Mushroom and then a regular Mushroom) or when a Super Goomba comes in contact with a mushroom during a level. They take 10 stomps to kill, or fifty fireballs to defeat. They can smash through most blocks. When defeated, they drop three Mushrooms.

Mushroom Goombas appear in Super Mario Spikers, serving as a boss that can be faced off in the game's Boss Blitz mode. They are said to have been artificially created by the Spikers league because of their extreme rarity. To defeat it, the ball must be spiked into its mushrooms, and after three spikes, a mushroom will be destroyed. Once all are destroyed, the Mushroom Goomba will be defeated. Though it won't attack opponents itself, throughout the battle smaller Msuhroom Goombas will appear, which can stun opponents.

Mushroom Goombas appear in Stampede Breakfast 3: Brunch Time! as enemies. They have near exact behavior as they did in Super Mario Maker Phi, boasting a ton of health. They drop a single mushroom on their defeat, which works identical to how it did in the Super Smash Bros. series.

Mushroom Goombas appear in Minion Quest: Strength in Numbers as units that can be used in squadrons. They are classified as Melee troopers, and attack by charging into enemies. Being Melee troopers, they are strong against Ranged troopers but weak against Flying troopers. They have a high HP, POW, and DEF stats, but low SPEED and EVASION. 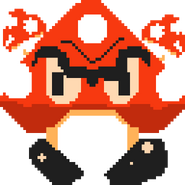 Retrieved from "https://fantendo.fandom.com/wiki/Mushroom_Goomba?oldid=2967269"
Community content is available under CC-BY-SA unless otherwise noted.