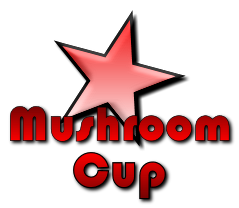 Mushroom Cup is one of the 4 Nitro cups that appears in Mario Kart Dimensions. There are four courses that appear in Mushroom Cup, and are the easiest nitro courses. Each course has few obstacles.

Luigi's Circuit is the first course in the Mushroom Cup. Luigi's Circuit has 3 laps. The course starts with a large concrete plaza-like area with no buildings or fountains. The "plaza" has a small lake on the right side which starts the underwater part of the course which has two groups of torpedo boxes, and various Cheep Cheeps swimming around. On the other side of the lake, there is a curved area with a fork in the road, that goes right around a chain chomp. The roads then combine where many Goombas and boost pads are. There is a small muddy area, then the finish line. The course is considered to be the most challenging version of Luigi Circuit yet.

Sky Fortress is the second course in the Mushroom Cup and, like Luigi's Circuit, has 3 laps. The course starts out on a cloud area, when there are three small jumps (which you can trick off of) and a long right turn. After the turn, the karts enter some ruins of a fortress with three Thwomps and a Roto-Disc. There are also many blocks and disabled Roto-Discs that appear on the ground in the background. After the ruins, there is a super boost pad which takes you to the second floor of the fortress. There are Boos, Dry Bones, Thwomps and Roto-Discs that appear. There is a large left turn which makes you fall off of the fortress. There are then a few ? Blocks and Used Blocks which forms a bridge that connects the final cloud platform to the starting platform. This course is based off of a traditional fortress that appears in Super Mario Bros. 3.

Pinna Playground is a 3 lap race course and the third course of Mushroom Cup. The course starts at the gate of Pinna Park, where the racers drive straight into the park, around the Clam Cups ride and onto the Roller Coaster. The Rollar Coaster is covered with boost pads making the racers go quick. The roller coaster starts by making a quick left turn, four "A" raps and a long right turn. The roller coaster ends with a loop-de-loop and an upward ramp. The roller coaster ends with a busted track at the end of the upward track. The broken track acts as a jump which sends you into the water behind the gate, where the racers do a U-Turn and go back to the gate of Pinna Park. On the roller coaster, Mecha Bowser can be seen and will shoot fire at you. Two Electro-Koopas also throw their electrified shells at the racers. The Electro-Koopas appear around the Clam Cups.

Airship Ruins is a 3 lap race course and the final course in the Mushroom Cup. The course takes place almost completly underwater in the "Sunken Ghost Ship" in Dinosaur Land. The course starts off on Choco Island, where the racers drive over many Pop Tart-like hills and into the water into the Sunken Ghost Ship, where many Boos and Fishbones are. The course starts off on a pipe with a boost jump. After the pipe, the racers land on a chocolate hill and turns a total 360-degree turn downward into a lake. The lake includes many pieces of wood and cannons, along with floating wrenches which can be destroyed by a torpedo. In the water, the racers drive straight, then turn left on to a wooden pirate-like platform with a Bowser statue, Rocky Wrenches and Cannons. After turning a right turn around a large mass, you go down a slope into the water where many Boos and Fishbones haunt. Eeries and a few Fishin' Boos will also block your way by floating around a left turn which leads to a red ? Ball, which teleports the racers out of the Ghost Ship and on top, which has a left turn where a Thwomp is and a pipe cannon, which sends the racers up to the finish line.