Murasame, also referred to as The Blade Demon, is a character in the Doom Dome Battle series who makes his first and only appearance as a boss in Warriors of Babylon. He is an important character in the backstory of Koh Kazama.

Murasame has a rather small hitbox which makes it harder for opponents to land hits on him. He however usually hovers in mid-air, which only makes it impossible to land low-ground attacks on him unless he is ducking. His main aspect is that he can transform into various blades, most often into a katana, scythe, axe and broadsword. He can only change a part of his body, or transform his entire body completely. His red ofuda always stays with each transformation.

Having been born in ancient times, Murasame is a demon that often got referred to as The Blade Demon. This title came from the fact that every time he defeated a warrior, he would consume their weapon (often a sword) and add it to his own arsenal. One time he threatened the village of Shinrin, but was led into a trap by monks who trapped him with many ofuda's and locked him up under the ground of the village. One day he managed to break free from these seals and attacked the village. Koh stepped forth to defeat him and managed to do so after an intense battle. With his last power Murasame opened a time portal underneath Koh which would send him forward in time, with the remark that although he defeated him, he would never be able to protect his village ever again.

Murasame was brought back out of time by the host as an obstacle for Koh to face during the games. He appears in the pocket dimension of the Shinrin Clan at the Hanging Gardens of Babylon. 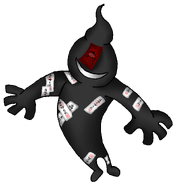 As he appears in Warriors of Babylon
Add a photo to this gallery
Retrieved from "https://fantendo.fandom.com/wiki/Murasame?oldid=2592785"
Community content is available under CC-BY-SA unless otherwise noted.