View source
“Really, Mario, you think that you can beat ME with your flock of baby friends? I´d think again, and really well! HA HA!”
— Mulgarth Koopa, His catchphrase made by himself

Mulgarth Jared Koopa is a Koopaling obsessed with nature and was born with nature powers that allow him to move leaves, plants, and other natural substances in the air. He can frequent around Tim, but also can be found next to Gwendoline. If not, he is alone reading his book, Magical Nature Tricks or sleeping, which is where is chubbiness comes from. He has a pet Fuzzy named Patroclo, which caused him a permanent eye infection.
Unlike other Koopalings, Mulgarth always tries to find the bright side in all sticky situations, and never the dull side. He also doesn´t whine or complain.

As said above, Mulgarth always tries to find the bright side in all sticky situations, and never the dull side. He also doesn´t whine or complain. He is nice to most of the Koopalings.

Mulgarth is found a bit "deficient" by most of the Koopalings. His hair is a bit long and green. He is quite chubby, due to his 1-hour naps each day. His eye is dark pink due to an accident with his pet Fuzzy, Patroclo. His wand bulb and shell are green. He has 4 fangs sticking out of his mouth from the top, and a big one from below.

Please warn me at my talk page or in the comments when you would like to use him in your article.
Topaz (Talk🌟Contributions)

Interaction with the Koopalings or others

They hate each other.

He enjoys his inventions, while Thomas likes his nature discoveries.

He wonders how Pyotr´s magic paintbrush was made.

They have a discrete relation; no one really knows if they are friends or not.

He doesn´t like his attitude as he is already building his own castle.

He sometimes likes bouncing on his circus ball.

He often defends other Koopalings from his bullying. Mostly, Roy beats him up.

Ross does not ever prank him becuase Mulgarth protects

They don´t interact much.

They haven´t met, since they are too lonely and Bowser´s Castle is big, like really big.

He for no reason appreciates her bow.

He thinks Theo is too violent. He has told him, but Theo doesn´t care.

Mulgarth wonders about his arm cannon.

He frequents around him sometimes.

Mulgarth is fond of his moon-walk.

They don´t see each other very often.

They only met themselves briefly.

The two are good friends, but don't interact very often.

Both like magic, so they read their books together.

Mulgarth has not met her yet.

He always wants to know what makes his eyes change color.

He hates his violence, and is worried about it.

She enjoys his stone collections and has helped him earn more.

Likes playing dolls with her.

Mulgarth admires Jinkesse because of her cyborg creation, but is also scared of her.

Aiva likes his magical plants shows, while he likes her electricity powers.

Since Noah is not from Bowser´s Castle, they have not met yet.

Mulgarth enjoys eating Doritos with him.

Mulgarth Koopa with his wand 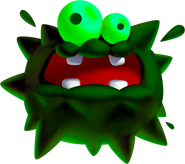 Mulgarth´s sprite made by Topaz the Dark Bear (t∣b∣c), with background help from Simpson 55 (t∣b∣c)
Community content is available under CC-BY-SA unless otherwise noted.
Advertisement