Mudsdale is a large, equine Pokémon with short, brown fur and a black-and-red mane and tail. It has heavy-lidded, black eyes with a red rim along the bottom, a red blaze on its muzzle, and long, pointed black ears with brown insides. This Pokémon’s mane extends down around its eyes. Along the top of its neck, its mane is black with red at the tip and stands up straight. On either side of its neck, the mane forms three thick structures similar to dreadlocks with red mud around the tips. The mane extends all the way down Mudsdale's back in a thin line before becoming its tail. The tail appears similar to its dreadlocks. The tail is much larger than the dreadlocks on its mane, but still has mud around the tip. However, there are several black notches missing from the mud. Around its hooves is a protective coating of red mud, which has three notches around the bottom.

Mudsdale is known for both its powerful body and emotional fortitude, which prevents it from becoming agitated. Regardless of the trouble it is in, it will never cry out and defeats opponents with a single blow. The mud around its legs gives its kicks extra force; one kick can turn a car into a scrap pile. When galloping, its hooves can dig holes in asphalt. While it is not swift, it has excellent stamina and can continue on for three days and three nights while dragging over 10 tons 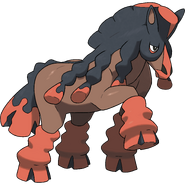 Mudsdale resembles draft horses such as the Clydesdale, known for the feathering on their legs.

Mudsdale may be a combination of mud and Clydesdale.