Start a Wiki
Mudkeep is a toy Mudkip who is the main protagonist in Stelios7 (t∣b∣c)'s interactive mockumentary Mudkeep in Stilioseland.

Mudkeep is rather impatient and likes to take a risk with lots of leaping and rash decisions putting his life on the line.

Mudkeep is a plastic Mudkip toy, formerly a plushie with the same colours. He has a loose head where has a special feature of turning his head all the way around. Which he commonly uses to freak out others.

But when appearing in the Humane world, Mudkeep will switch into his Sora derp appearance which is shown in Page 142 Ore.

Mudkeep is defenseless to Stiliose's mocking as he is his God, his writer. Mudkeep has little respect for him due to his cruel jokes and antics and for ruling Stilioseland.

Mudkeep hatred of Stiliose leads him to destroy his childhood by killing him in Kill soon to be followed by the swift death of Regigigas. He leaps with more determination as shown in Pounce, furthermore giving us more hatred evidence.

He was taught as a child that Regigigas was "The Devil" as revealed in Page 38. He strongly believes in this especially after Buzzigigas gets its own back in Attempt.

Azuzu is Mudkeep's lost love, Mudkeep claims that they were and still are deeply in love. She first appears as a card in Beedoofs collection and is tried to be stolen by Mudkeep due to him dearly missing her in Take.

After initially not trusting Beedoof as much from when they met in Play.

He admires Beedoof was his success and is more of a father figure to Mudkeep. The two now have bonded to become close friends.

Mudkeep makes his debut videogaming appearance as a guest character.

Mudkeep finally gets his own game in which he is one of the 8 default characters. 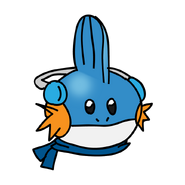 Christmas Mugshot made by Arend (t∣b∣c). 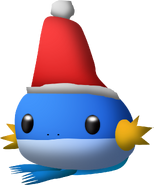 Mudkeep Christmas art by Toad'ShyGuy (t∣b∣c).
Add a photo to this gallery
Retrieved from "https://fantendo.fandom.com/wiki/Mudkeep?oldid=2401769"
Community content is available under CC-BY-SA unless otherwise noted.