Sonny Resetti, usually referred to as Mr. Resetti or just Resetti, is a mole that appears in the Animal Crossing games. His job is to make sure that players always save their game before quitting - and that means no resetting. Each time a player resets, Mr. Resetti becomes more hostile towards them, and resetting the game too many times may even lead to a "fake" reset.

Resetti appeared as a competitor on episode 1 "Taming the Savage Beast". In Level 1, he advanced in third place for making all the way through the Tire Swing before failing the transition to the Mag Wall and hitting 2 Point Thrusters, earning 75 points.
In Level 2, he was eliminated in fourth place for accumulating 10 points for making 2 jumps on the Spinal Ascent before failing on the third. 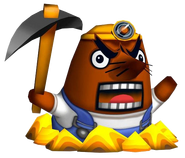 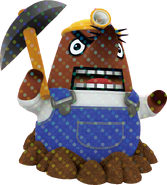