Fantendo - Game Ideas & More
Register
Don't have an account?
Sign In
Advertisement
in: Characters, What is the New Fantendoverse?, Green Productions/Characters,
and 8 more

Mr. O in the first Guap Squad is a very top class minion, but once Andy quits, he is the leader of The Eviltons!

Mr. O is very mean and won't show any mercy to the shapes! He loves being evil and wouldn't be good for anything!

When he first appeared in the Guap Squad, Mr. O was an oval robot that has red eyes, a blue robot like mouth, black feet, and a mini chimney. In later appearances, Mr. O is a blue robot with red eyes, a bunch of bolts, a chimney, a little hatch, blue arms, and black feet.

Mr. O's first appearence is in The Guap Squad. He's a main boss that that does not give up easily! He can use a variety of fog based attacks.

The Guap Squad 2: The Legend of Wild X

Mr. O is set to reappear in The Guap Squad's sequal as a main antagonist, yet again.

Mr. O is set to appear in Fantendo Brawlers as DLC! He will use the moves from The Guap Squad he uses.

He is set to appear in The Psychic 2 as a boss!

Mr. O hates Guaptain so much! He always wishes he could kill him!

Though hates him less than Guaptain, he still hates him a lot!

Mr. O hates cowboys and people that stop him! The two combined, he can't stand Joe!

Mr. O isn't a big fan of girls, so automatically, he hates Ashley! But he hates getting hit by lipstick, and makes his hardrive heatup!

Mr. O hates him so much, he erases his memory of him after each time he sees him!

Though he used to think highly of Andy, but after Andy became good, he can't stand Andy!

He thinks highly of any viliian he works with! This is unique for a leader of villains! 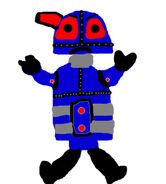 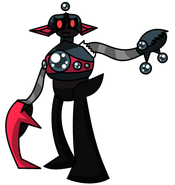